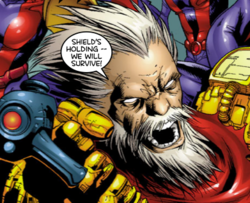 Katu was an Inuit fisherman living on the Siberian tundra and was unaware of his mutant ability until the Soviet army came to investigate the electromagnetic interference he was unknowingly causing from his village. To end the nuisance he was causing to their communications systems, super-soldier Omega Red ripped off both of Katu's arms.[2] Obtaining bionic prosthesis for his lost arms, he swore revenge on his enemy, and joined the Acolytes.[3]

Eventually, the Acolytes allied themselves with Cable in order to stop Omega Red, and Katu saw there an opportunity. During the battle, Katu unleashed his powers in a blast that seemingly killed him and Omega Red.[4]

Surviving his attack on Omega Red, he was later among the millions of mutants who died during the Wild Sentinel attack on Genosha.[1]

Katu was later resurrected by the Transmode Virus from Selene, along with some other Acolytes.[1]

A 'living satellite dish', Katu is able to siphon off a portion of the Earth's electromagnetic field, converting it into discharges of destructive force while creating a vacuum in the environment that causes inter-atmospheric anomalies, counteracting natural weather phenomena.

Like this? Let us know!
Retrieved from "https://marvel.fandom.com/wiki/Katu_Kath_(Earth-616)?oldid=5590699"
Community content is available under CC-BY-SA unless otherwise noted.