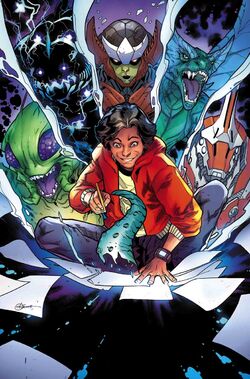 Kei Kawade was an avid fan of monsters whose family lived in Atlanta, Georgia. When the Terrigen Cloud swept through town, it activated latent Inhuman genes within Kei who then entered into a cocoon and underwent Terrigenesis, transforming him into a Nuhuman with the ability to summon the monsters he drew.

At first, neither Minouru nor Deanna believed their son had acquired powers, because there were no outward signs, and when Xemnu suddenly destroyed his father Minouru's place of business, the family was forced to relocate to St. Louis, Missouri in order for Minouru to find work. After a second monster attack, his mother Deanna and Minouru began to suspect their son, and commenced moving around the country to avoid attracting attention to the monsters' connection with Kei.[3]

After moving to the North Shore of Oahu, Hawaii, Kei one day drew Fin Fang Foom battling the Hulk, which due to his connection to an interstellar force of destruction, physically manifested the pair in conflict outside his residence.[4]

The Kawades then moved to Missoula, Montana and Chicago, Illinois; however, the monster incidents continued to follow them.[5] Eventually settling in Springfield, Missouri, Kei continued to draw numerous other monsters. Around this time, the Earth became victim to an invasion from the Leviathon Tide, which began attacking cities all over the world. This forced Kei to summon Fin Fang Foom, Zzutak, Green Thing, and Gorgilla who met with him near his family's latest home.[1]

After seeing a mark on a cave painting in Peru,[1] and tracking the incidents from Oahu to Missoula to an elementary school in Chicago where each time the symbol appeared, world-renowned monster hunter Elsa Bloodstone finally learned Kei's name and paid him a visit in Springfield as well.[5]

Elsa kidnapped Kei and brought him to Parker Industries in Manhattan, where the boy spoke with Groot, much to the surprise of Rocket Raccoon. Spider-Man was eventually able to track down the Kawades and bring them to New York City as well, where Kei demonstrated his abilities by drawing Devil Dinosaur, who instantaneously appeared in the room in the company of Moon Girl, who had unintentionally been summoned as well, and rapidly took a liking to Kei as she began to inquire as to the nature of his abilities.

Kei's parents then confessed their son's Inhuman origin, prompting him to reply that he too is a monster, though Lunella insisted he wasn't, rather that they were alike. Queen Medusa then brought in Magister Karnak to further elucidate privately to the adults the connection between Kei, the monsters, the Universal Inhumans, and the Leviathon Tide. Karnak stated that Kei was destined to become a great warrior, like another Inhuman before him, and perhaps the planet's best hope against the impending invasion; meanwhile Lunella told Kei she had deciphered the Leviathons' language and learned of "something really bad" that was coming.[3]

The following hours, when the amount of invading Leviathons increased exponentially, Kei remained at Parker Industries, using his powers to summon monsters to help the superheroes fight the Leviathon Tide and redistribute them throughout the globe as the situation demanded it, a position which put Kei under pressure, due to his feeling of inadequacy and the discomfort he felt with manipulating creatures into fighting on his behalf. Parker Industries was soon targeted by the servitors of the Leviathon Mother, whose sole mission was to murder the young child. The combined efforts of the heroes defended Kei from the servitors, but the Leviathon Mother herself made earthfall soon afterwards.[2]

Having recognized it was his responsibility to stop the Leviathon Mother, Kei personally confronted her. With all the monsters he had summoned defeated, he decided to try his hand at finishing the drawings of six monsters he had come up with on his own. The gamble worked, and Kid Kaiju managed to summon Slizzik, Hi-Vo, Aegis, Fireclaw, Scragg and Mekara to his aid. The monsters were capable of holding their own against the Leviathon Mother, until she killed Fireclaw. As a last-ditch effort, Kei used his powers on himself and his monsters, temporarily merging them into Smasher, who managed to put an end to the Leviathon Mother and kill her.

Once the dust settled, Kei requested the heroes to return home. He was given an entire island the Inhumans created for him, named Mu, which served as his and his parent's home, as well as a refuge for his monsters. Elsa Bloodstone was also asked to guide him and protect him.[6]

NuHuman Physiology: Kei was a human with latent Inhuman genes (a Nuhuman), whose powers were activated when he underwent Terrigenesis:

Like this? Let us know!
Retrieved from "https://marvel.fandom.com/wiki/Kei_Kawade_(Earth-616)?oldid=6098845"
Community content is available under CC-BY-SA unless otherwise noted.