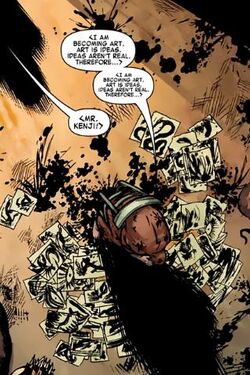 I am becoming art. Want... a preview?

Kenji Uedo (上藤 健之) worked as a successful and noted artist in Tokyo, Japan until his unstable mutant powers manifested.[3] After his power manifestation Rogue, Cyclops, Wolverine, Hope, and the other Lights traveled to Tokyo to help him.[2]

Cyclops and Wolverine tried to contain Kenji, but with his powers out of control, they were unable to do much. When Hope and the others arrived, Kenji was already beginning to destroy buildings in downtown Tokyo.[2] Hope was unable to get close enough to touch Kenji at first, but she was able to control her powers enough to mimic Kenji, although the strain of mimicking his powers made her faint from exhaustion.[4]

Cyclops then ordered the Lights and Hope to stand back while the X-Men handled Kenji. Rogue tried to absorb Kenji's powers, but was unable to handle the strain. Cyclops decided that there was no other alternative: Kenji needed to be stopped. However, before Wolverine could deliver the fatal blow, Hope was able to convince the light to save Kenji. Hope was able to mimic Kenji's powers again and use them to successfully subdue Kenji so she could physically touch him, which resulted in the stabilization of both his powers and personality.[5]

After his powers were stabilized, Kenji returned with the X-Men and the to Utopia. There he was debriefed by Cyclops and Emma Frost before being cleared.[6] Kenji agreed to stay on Utopia and work with the Lights, but he still seem isolated and reserved.[7]

Once the Cuckoos received the signal of a new mutant activation, Lights went to Berlin. Kenji used his powers to protect the team members from the Sixth Light's telepathy, and to connect them all with the boy, to persuade him to be born.[8]

After the trial of Teon's guardianship, Kenji and Laurie discussed their strange ties to Hope Summers and plans to find out what's going on.[9]

When the Seventh Light committed suicide over the ridicule of his friends, Kenji planned to kill them, but Wolverine stopped him.[10] Conversing with Transonic, Kenji came to the conclusion that Hope must be killed, to sever her control over the Lights.

Following the schism between Wolverine and Cyclops, Kenji chose to stay on Utopia and invited No-Girl to join the Lights. He displayed an infatuation with No-Girl, and panicked when her tank was destroyed in an explosion caused by a memory-less Sebastian Shaw. Improvising, he made a body for her with his powers; she was very appreciative about it.

After returning with Shaw, who was attacked and imprisoned by the X-Men, the Lights were approached by Dragoness and other mutants from Utopia who had a problem with them receiving "special treatment". Seeing that their "messiah" was not with them, a fight began between the rogue mutants and the Lights. After being chastised by Cyclops for not being able to control her team, Hope lashed out at the assailants by manipulating Kenji's powers herself, causing him to expand against his will, engulfing the attackers. The act of Hope overriding his will pushed Kenji over the edge, with him stating that he was "ready for her".[11]

The following day, Kenji met with Laurie, seeking to speak with her about going against their "Fiery Slave Master". Laurie, felt uncomfortable about speaking in the open, and attempted to leave. However, Kenji was able to project the conversation with her about how Hope could not be trusted with her incredible power, and expressed anger that she has made no effort to return them to looking "normal". Laurie told him that, while she had similar feelings, she was reluctant to act on them.

Later that day, Kenji met with Emma Frost in a counseling session. He left with her thanking him for the "enlightening" meeting. Hope saw him leaving Emma's office, and while walking with him to discuss it, noticed something amiss. Kenji revealed that he had found a way to separate himself into parts, and that Martha was not with him. He explained to Hope that she was the one to show him how, back in Tokyo, when his powers finally manifested. Once Hope realized that he has "tapped in" to her, as well, as she found herself held in one of Kenji's techno-organic webs, with many furious, screaming at mutants trying to get at her below.

Kenji revealed that his "masterpiece" was a form of subtle mind control he had been honing for months with many of the mutants on Utopia; by placing pieces of himself inside of their brains, he had been "pushing" them to turn on Hope, whereas with her team, he had manipulated them into being otherwise distracted at this moment. The final key in his plan was Martha; by merging her brain with his (as she was still in the body he had created for her), he had complete access to her thoughts and powers.

Hope then revealed that Martha has been here for a quite some time, and was aware that Kenji had been using her. Kenji couldn't comprehend how an illusion was cast on him, considering his strong psychic blocks. Hope explained that she had been harnessing Martha's power.

As Kenji tried desperately to stop her, Martha approaches him, telling him that if it were any consolation she "had no heart for him to break". Using an unspecified psychic attack, Martha destroyed Kenji's (and by extension, her own) body. As he died his mind control seeped out of the residents of Utopia.

Because Kenji's death caused the breakdown of his techno-organic form, Martha now resides in a new holding tank, remaining as a severed brain.

Kenji was recently shown to be resurrected, now wanting revenge on Storm and the X-Men for killing him.[12] He attacked the X-Mansion as well as Callisto, Forge, and Marisol. Using his power against him, they were able to defeat Kenji. As his body disintegrated, he stated that maybe he would see them again soon.[13]

Kenji is one of five post-M-Day mutant activations. His powers include:

That status of post-M-Day activated mutant gave him also the following characteristic:

He is a very skilled Japanese artist.

His powers supposedly make his mind more unstable than it already was making him prone towards erratic behavior. According to Storm, he is a sociopath.[12]

Like this? Let us know!
Retrieved from "https://marvel.fandom.com/wiki/Kenji_Uedo_(Earth-616)?oldid=5521264"
Community content is available under CC-BY-SA unless otherwise noted.