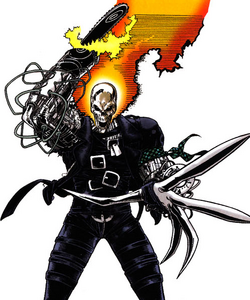 Human whose consciousness was transferred into a

Kenshiro "Zero" Cochrane was a hacker who ran with the Hotwire Martyrs, a street gang based out of the Transverse City sprawl. In mid 2099, the Martyrs hacked into a fiberoptic trunkline and snagged a heavily-encrypted data archive of unknown origin. While they were attempting to decrypt the file, the Martyrs were attacked by a gang known as the Artificial Kidz, who proceeded to murder most of the Martyrs and set off in pursuit of Zero and the archive. With the poison from the fletchette round he took while fleeing the Kidz rapidly eating away at his nervous system, Zero makes a last-ditch effort to screw them over by transferring the encrypted file to his girlfriend and then jacking directly into cyberspace in an attempt to burn out his headware implants.

Shortly after his white-hot fade into oblivion, Zero awakes to find himself in a surrealistic cyberscape populated by a group of rogue machine intelligence's who call their realm The Ghostworks. These AIs believed that the current human society (your typical "Corporations Own Everything" cyberpunk dystopia) was heading for a total collapse. And, being completely dependent on the world's technological infrastructure for survival, they wished to send Zero back to the real world to serve as their agent of change. Appealing to his anarchist sensibilities, the Ghostworks couched the whole deal as a chance for him to get back at The System and all those authority figures who seemed bound and determined to make life miserable for "the little guy." Zero, of course, accepted - though whether this was really of his own free will or due to subtle modifications the AIs made to his personality construct is debatable.

The machines hijacked an automated factory and constructed a heavily modified variant of a Cybertek 101 warbot, laden with advanced nanotech weaponry, self-repair, and camouflage capabilities, and downloaded their copy of Zero's personality into its neuro-net. Before hitting the streets, Zero used the robot's holographic capabilities to wreath his skull-like head in artificial flame - an homage to his fallen comrades that also served to make him look very similar to the Ghost Rider of the previous century. Appropriately enough, his first course of action was to seek vengeance against those responsible for their deaths. His quest eventually lead back to the D/Monix corporation (the legal owners of the archive) and his father, Harrison Cochrane.[1]

During the course of his investigation into the missing file, Harrison realized that, as the hackers had used his own access codes to intercept the data transmission, the only suspect could be his son, Kenshiro. Feeling more loyalty to the corporation than to his gutter-trash son, it was a simple matter for Harrison to hire the Artificial Kidz to wipe out the Hotwire Martyrs and retrieve the archive. Upon beating this information out of his father, Ghost Rider prepared to kill the old man, but was distracted when he learns that D/Monix was currently torturing his former girlfriend, Kylie Gagarin, in an attempt to find out where she stashed the copy of the archive he had sent her before his "death."[citation needed]

While hunting down the component chemicals for the drug he needs to save Kylie's life, Ghost Rider headed to an Alchemax facility in Nueva York - where he ran afoul of current incarnation of Spider-Man. They battled, but GR made it away with the chemical in time. With the drug synthesized, he volunteered to go into Kylie's head to bring her out of her coma, which began a phantasmagorical journey into her psyche that gave insight into both Kylie's past and provided a few glimpses into what Zero was like when he was alive. Of course, he didn't much care for the version of himself that he saw and, after Kylie woke up, Ghost Rider tried to convince her that Zero was dead and that she was better off without him. Of course, the way he said it lead her to realize that GR was Zero and, thus, had the exact opposite effect of making her more curious about him.[citation needed]

After discovering that his personality construct has been modified to prevent him from mentioning certain topics of discussion (namely the Ghostworks and things related to them), Ghost Rider dove into cyberspace in an attempt to track the Works down and hammer out some answers. The AIs hid from him and some discussed the possibility that they may have made a mistake when they chose Zero as their agent. Others suggested they wait it out - citing that the Ghost Rider would soon be much too busy to bother them. The prophecy came true, of course, as he was launched into a series of battles pitting him against a heavily-cybered Jeter (the man who killed him), a thrill-kill club that has been using monstrous-looking constructs to hunt down former special-forces types for sport, and a highly-skilled cybernetic assassin named Coda - who actually managed to blast GR into his constituent components.[citation needed]

A short time later, Ghost Rider revived to discover that the Doom of 2099 had managed to take control of the United States. Having earlier made a deal with the Ghostworks for access to their agent (in exchange for leaving them be), Doom sent his SHIELD agents out into the city to track the rogue android down. GR was hauled before the President and presented with an offer to become the Federal Marshal for the Transverse City region. Though he initially refused (not wanting to become part of the System he so despises), Doom triggered a series of override commands and forced Zero to accept the position.[citation needed]

Flush with his new found power, Ghost Rider proceeded to ride roughshod over a number of petty criminals and gangs, as well as the drug lord who had helped him locate the chemicals he had needed to save Kylie earlier. This betrayal began a downward slide where all of Zero's former friends and associates begin to turn on him - seeing only another Oppressor rather than the Hero of the Common Man Ghost Rider thought himself to be. At the same time, he found himself despised by the "real" securi-cops, who saw him as a loose cannon giving them a bad name (and, likely, suffer some jealousy for the wide operational latitude he has been given).[citation needed]

Like this? Let us know!
Retrieved from "https://marvel.fandom.com/wiki/Kenshiro_Cochrane_(Earth-928)?oldid=5465324"
Community content is available under CC-BY-SA unless otherwise noted.