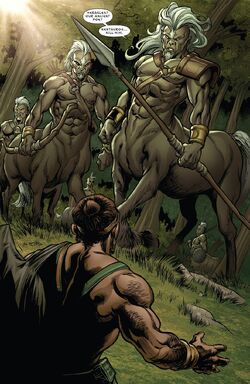 Centaurs (Greek; Kentauros/Kentauri)[1] are half-human, half-horse creatures in Greek mythology. They have the body of a horse and the torso, head and arms of a man. They were considered to be the children of Ixion, king of the Lapiths, and Nephele, a cloud made in the image of Hera.[citation needed]

Centaurs were known in the Hyborian Age,[4] at least as matter of legend.

Nessus was a centaur who worked as a ferryman for the River Evenus. He kidnapped Hercules' second wife Deianira, whereupon Hercules shot him with an arrow. Feigning a wish to make amends, the dying centaur told Deianeira how to make a love charm from his allegedly enchanted blood, aware that it was now tainted with the lethal poison of the Lernean Hydra, in which Hercules had dipped his arrows. When Deianeira rubbed the supposed love charm into Hercules' shirt, she inadvertently caused Hercules' mortal demise, granting Nessus his late revenge.[5]

The Centaurs were later banished from Earth to the land of the centaurs in the dimension of Olympus.[6]

The human offspring of a centaur killed himself when his curiosity about why his father never came out from behind a locked door got the better of him.[7]

During Thor's first visit to Olympus, he witnessed a centaur entertaining itself to the music of Pan.[8]

Ares used the Ebony Blade lost by the Black Knight to try and rally the Centaurs and Satyrs in attempt to conquer Olympus. Even with Amora the Enchantress by his side, Ares was defeated by Hercules and the Avengers.[6]

After the Avengers escaped Tartarus, they were confronted by a centuar guard at the gates of Olympus. They took him down with ease, and they continued their search for Hercules.[9] As the Avengers battled Zeus, a centaur fled carrying an Olympian woman to safety on its back.[10]

The New Warriors witnessed a group of centaurs when they were summoned to Olympus to test Aegis.[11]

A herd of centaurs joined the forces of Hippolyta against Valeria von Doom.[12]

Deadpool faced Marcus the Centaur who had been bitten by a Werewolf and then bound to a Symbiote, culminating in him gaining their myriad of abilities. Dracula recruited Marcus as his secret weapon, whom he described as "a perfect soldier with no weaknesses".[13]

While walking through Central Park; Hercules was confronted by a group of Centaurs.[14] They came to the city looking for the Oracle Tiresias. They battled the demigod, and when they started firing arrows at him and nearly hitting nearby civilians, Hercules had enough of the battle and pulled out a Earthly firearm. They agree to a truce, and their leader Drassus explained that they are only on Earth to learn of the "Uprising Storm". Hercules agreed to help them and they left him with a pipe that could summon them.[1] They later returned just in time to fire arrows at Catastrophobia, saving Hercules. Catastrophobia escaped, and the Centaurs decided to lay low until the next battle.[15] Hercules welcomed the Centaurs to stay at his apartment building, and they helped with dinner.[16]

The Pet Avengers encountered a herd of Centaurs.[17]

Like this? Let us know!
Retrieved from "https://marvel.fandom.com/wiki/Kentauros?oldid=5124355"
Community content is available under CC-BY-SA unless otherwise noted.