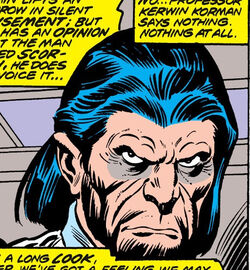 Kerwin Korman was a criminal scientist in the employ of A.I.M. Alongside the Scorpion, he battled Ms. Marvel in the guise of the Destructor, wearing a battlesuit of his own design, but was defeated. Attempting to escape from A.I.M, who wanted to punish him for his failure, he fled to a cavern containing a lost outpost of the alien Kree where Ms. Marvel was battling the robot called the Doomsday Man. Opening a box left behind by the Kree during the course of the battle, Korman was blinded (temporarily, as it turned out) and, firing blindly, caused a cave in which seemingly killed him.[2]

In fact, the Kree technology bonded Korman with the Doomsday Man, which eventually came into A.I.M's possession. They effectively used Korman as a living power source until he eventually escaped and encountered the Avengers. The out-of-control Doomsday Man battled the Avengers, who defeated it and discovered Korman's presence inside the robot but were unable to safely disengage him from it.[3]

A.I.M eventually retrieved once again. It appeared that by this point, Korman's limbs had been removed in order to better facilitate his merger with the robot and he was also now completely bald and sickly. Korman (as the Doomsday Man) escaped once more and went on a further rampage to lure out his old foe Ms. Marvel who he blamed for trapping him in the robot and who forcibly removed him from it during their fight. Korman, who had grown suicidal while trapped inside Doomsday Man thanked her, presumably believing she had killed him as he wanted and then passed out. Wonder Man later told Ms. Marvel that Korman would live.[4]

Formerly: those of the Doomsday Man robot.

Gifted scientist with a genius intellect

Like this? Let us know!
Retrieved from "https://marvel.fandom.com/wiki/Kerwin_Korman_(Earth-616)?oldid=5488861"
Community content is available under CC-BY-SA unless otherwise noted.