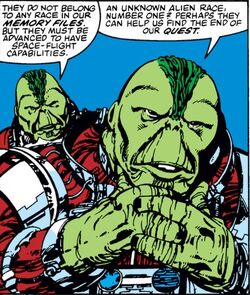 Kestorans are a nomadic race living in a interstellar ark, known as Kestor's Hope, traveling through the Negative Zone. Originally, they inhabited the planet Kestor. These terrestrial Kestorans discovered that their planet was about to be destroyed from an impending supernova of their sun. In order to save their race, twenty-thousand were chosen to board the interstellar ark to travel to a habitable new planet similar to Kestor. Five-hundred were selected to pilot the ship while the rest remained in cryogenic capsules. Soon after launch the explosion from the supernova destroyed the navigation system, destroying the programmed destination. Five-hundred generations later, the nomadic Kestorans encountered Fantastic Four, who were exploring the Negative Zone. Reed Richards was able to repair the navigation systems and locate a planet nearly identical to the conditions of Kestor. Unfortunately, the physiology of Kestorans that descended from the 500 original crew members had evolved and adapted to the conditions of the damaged ark, rendering the new planet unsuitable despite being identical to their home world. After being asked about those in stasis, a Kestoran known as Number One tells Reed Richards that those in cryogenic stasis died when their capsules were damaged in the supernova long ago, and a secret known only to a few, passed down over the generations, and that the rest of those aboard the Krestor's Hope will be told that the planet was unsuitable. [1]

Theocracy - On Kestor, the Kestorans lived in a technologically advanced civilization ruled by the "High Priestess." However, aboard Kestor's Hope, the ship's affairs appear to be governed by Number One, who knows about the Great Lie, and the Captain.

Like this? Let us know!
Retrieved from "https://marvel.fandom.com/wiki/Kestorans?oldid=3356443"
Community content is available under CC-BY-SA unless otherwise noted.