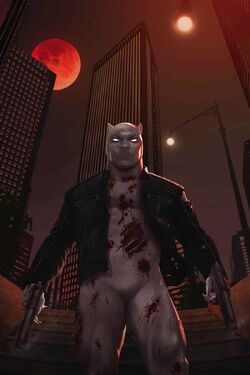 The son of hardline African-American cop Jonathan Peyton "Black Jack" Cole and a Jewish mother Ruth Cole, Kevin Cole was nicknamed Kasper by his peers on the police force because of his light skin tone. As a teenager, he saw his father supposedly framed for drug offenses. Kasper once believed this was because Black Jack had refused to go along with corrupt superiors. But it turns out that Black Jack had secretly been Kibuka the mythical leader of the 66 Bridges gang.

Kasper became a narcotics cop in the 74th Precinct's Organized Crime Control Bureau, supporting both his mother and his girlfriend Gwen; he still pined for his high school sweetheart Grace but stayed with Gwen when she had become pregnant with his child.

Hungry for promotion, Cole and his crew carried out unauthorized drug busts, drawing unwelcome attention from his crooked Lieutenant, Sal Anthony. Around this time, Kasper "borrowed" a bulletproof Black Panther costume being stored by his boss Sergeant Tork, and began wearing it under his clothes instead of his department-issued bulletproof vest. Kasper thought that the costume would give him the necessary edge to stand out and get his desired promotion. After failing to recruit Kasper, Sal had Kasper and his fellow officers ambushed. Thanks to the costume, Kasper survived, though the other officers were hospitalized.

Suspended for not wearing his vest, Kasper posed as the Black Panther to bring Sal down; eventually learning that he was a pawn in the manipulations of T'Challa and his foster brother Hunter also known as the White Wolf, leader of Wakanda's secret police the Hatut Zeraze. His crime-fighting eventually pitted him against the 66 Bridges gang and its regional manager Nigel "Triage" Blacque. Unbeknownst to Cole, Triage is secretly his half-brother.

Mistakenly identified as the "Panther masked vigilante" a title the police had ascribed to Kasper due to his recent actions, Tork was seemingly murdered. But Tork's death turned out to be a ruse orchestrated by the DEA and facilitated by T'Challa. Seeking to control his own destiny, Kasper offered to find Sal's kidnapped son in return for assistance in tracking down Kibuka.

Advised by the Falcon (Sam Wilson) that he needed to be more than just a man in a catsuit to achieve his goals, Kasper sought permission to eat the heart-shaped herb and gain enhanced powers like T'Challa by undertaking the Rite of Ascension. The villainous Erik Killmonger, offered him another option, a synthetic version of the Heart-Shaped Herb and help finding Sal's son, in return for Kasper dropping the Black Panther identity, becoming a White Tiger of the Panther Cult, and doing a favor for Killmonger in the future. Kasper accepted, but then tracked down the boy using his newly enhanced senses and help from Queen Divine Justice and Everett Ross, thus lessening his debt to Killmonger. Afterward, Kasper took on the identity of the White Tiger. He continues to chase promotion, allied with The Crew, (a team of inner-city superheroes) against 66 Bridges and Triage.

After giving up being a superhero and returning to the police full time, Kevin found himself in a dead-end job working for inconsiderate superiors for lousy pay. His ex-girlfriend Gwen threw him out of his mother's apartment and wouldn't let him see their newborn son without proper child support. Kevin ended up living in a massively downscaled apartment complex that he could barely afford on a desk jockey's salary.

While working on an assignment, Kevin was contacted by T'Challa to request his services one last time, he accepted since his assignment correlated to the favor T'Challa was asking him. This task involved him sifting through suspect reports about grizzly killings regarding Elias Wirtham who'd been conducting illicit surgical experiments on the black market. It turned out that the Wirtham's research had been funded with Vibranium smuggled out of Wakanda by the mutant criminal The Vanisher. With the villain's latest drop being centered near his neighborhood, Kevin busted Wirthman in his White Tiger persona and found out that Elias was only dealing with the Vanisher because he needed new Vibranium implants as his powers were on the wane. Cole left Cardiac handcuffed to his unlicensed patient while he headed to the Bar with No Name, the designated meeting place between Wirtham and the Vanisher.

Kevin approached the Vanisher, pretending to be Wirtham's go-to-guy. He let down his disguise when tagging the villain with his Vibranium knives. When the Vanisher teleported all the way back to Birnin Zana with the stolen Vibranium, White Tiger hitched a ride and doused him with it in order to trap him in place. Discontented with having ended up where he didn't want to return, Kevin immediately asked for a flight back to New York. T'Challa instead made Kevin an offer to properly train him and school him in the ways of Wakanda for his past and present services, coupled with a Wakandan arsenal of weapons and gadgetry, and an all-new look with augmented body armor.[1]

Thanks to Erik Killmonger, Kevin was given a synthetic version of the heart-shaped herbal potion that gives the Black Panther his/her powers. That gave him superhuman and peak human physical abilities including:

White Panther Habit: Vibranium microweave body suit capable of dissipating the kinetic and hydrostatic shock damage of bullets or bullet-like objects. It also has special vibranium soled boots for scaling vertical surfaces. Anti-metal properties of the Antarctic vibranium in his claws and boots will break down any known metal including adamantium.

Vibro-Dagger - Hand-held energy emitting weapon capable of cutting through most surfaces. The blade can also be used as a ranged weapon firing from the handle. It leaves a detectable 'mark' for tracking purposes.

Vibranium Energy Daggers Cole also utilizes glowing Vibranium knives which can either paralyze or mark his targets with which he can track using his Kimoyo Card.

Kimoyo Card - An extremely powerful and versatile PDA. Given to him by the original Black Panther to aid in his superhero career, the Tiger could use it in conjunction with his Vibranium Knives as the ultimate tracker system to follow anyone anywhere so long as he had a lock on their unique energy signature.[2] Cole could also utilize it as a communications device and 3-D holographic projector system to have a more meaningful face to face conversations.[1]

Retrieved from "https://marvel.fandom.com/wiki/Kevin_Cole_(Earth-616)?oldid=6431519"
Community content is available under CC-BY-SA unless otherwise noted.