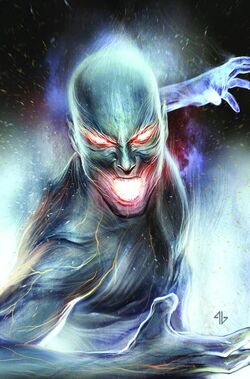 Everything is out there. Everything is real-- But nothing is, either. I think of it like this. I don't think of "real" the way you do, Errol. To me, the distinction is between what I've brought forward and what I haven't.

Kevin MacTaggert is the son of mutant expert Moira MacTaggert, and politician Joe MacTaggert. The boy was a mutant with the ability to warp realities. These powers burn out his body, leaving him in need of new host bodies to sustain himself. Kevin's only known weaknesses are metal and his need for fresh host bodies. Due to the unstable nature of his powers, Moira confined Kevin to a maximum security cell inside her mutant research facility located on Muir Island.[1]

During a battle between Magneto and the X-Men, the facility's security was compromised and Kevin's cell was damaged. This caused what remained of his body to burn out and required him to look for a new host. When a man came to destroy Moira's laboratory, Kevin possessed him and hid until he could escape the island.[2] He later tried to possess Phoenix and Polaris, but both attempts failed. Kevin managed to escape the island in one of Multiple Man's duplicate bodies and began a quest to find and possess his father's body.[3]

Even with the timely intervention of the X-Men, Kevin still managed to possess the body of his father, Joe, leaving a trail of discarded host bodies in his wake. During the battle, however, Joe's body also burned out leaving Kevin (now calling himself Proteus) vulnerable in his energy form. The X-Man Colossus used his metal form to slay the boy. His energies were disrupted and scattered all over Scotland. All thought Kevin to be dead.[4]

Sometime later, a woman by the name of Erika Benson (also known as Harness) was hired by AIM to use her son, Gilbert Benson whom she called Piecemeal, to collect the energies of Proteus for their own use. Gilbert had the ability to absorb the energies that were once Proteus, and his mother intended to collect it all.[5][6] Her mission was almost thwarted by the X-Force, New Warriors as well as Moira MacTaggert and a number of her mutants from Muir Island. Their intervention failed, and Gilbert's body exploded, resulting in a fusion entity that was both Gilbert Benson and Kevin MacTaggert.[7]

This new Proteus used his powers to reshape Edinburgh, Scotland to his own whim. The arrival of X-Factor brought a philosophical tone to the battle, as the heroes questioned the ethics of killing Proteus or trying to help them. In the end, Proteus realized that reality was not compatible with him and "killed" himself.[8]

Kevin was not dead, due to his body being a lattice of energy. He had only entered a low-energy resting state, making him both dead and alive at the same time.[9] He survived M-Day. When Selene and Eli Bard used the trans-mode virus to resurrect the dead, a piece of Proteus was carried with them, creating a link he could use to restore himself. Using the mutant Destiny he distorted her visions to lure Blindfold to Muir Island.[10] Turning her into a psychic magnet, she collected up his fragments. Getting the final piece from Destiny, Blindfold became Proteus' new host. He proceeded to attack the X-Men with his newly expanded powers, such as possessing Blindfold, Destiny, Nightcrawler, Psylocke, Husk, and Trance, turning the iron in Magneto's blood into lead, and knocking out Colossus while destroying the Blackbird's cockpit. As he was about to kill Rogue, Magneto launched both himself and Proteus into orbit.

With prolonged proximity to Proteus, Magneto was able to analyze his energy matrix while simultaneously using his electromagnetic powers to shield himself from Proteus' possession. After enough study, Magneto was able to change the part of Proteus that allowed him to possess Blindfold, and kick him out of her body. Unstable, Proteus dissipated. Magneto, however, warned that Proteus would be back.[11]

Proteus was found drifting in the Astral Plane by the Shadow King and became his new source of power, being used in an endless battle between the entity and Xavier, who had been forced to partake in this following his death at the hands of Cyclops. In the battle's final moments, Proteus was spread as a psychic infection on London by the Shadow King, and was unwittingly reconstituted by Xavier (now inhabiting Fantomex's body and calling himself X) once he had dealt with the Shadow King with the help of his X-Men.[12]

X and Psylocke confronted Proteus telepathically, and Kevin attempted convince the mutant heroes that he had no evil intentions and simply wanted freedom, and that he was willing to let bygones be bygones, but would defend himself if threatened. When X reacted poorly, Proteus trapped him and Psylocke in a "reality storm" that painfully merged them together before fleeing.[13] Proteus traveled to the Scottish village of Fetters Hill, in order to carry out an experiment as part of his plan to merge the real world with the Astral Plane. He granted the citizens of the town the ability to make real whatever they wished.[14] The village quickly fell into chaos, and it became a gestalt of the villagers' mindscapes. When the X-Men tried to confront Proteus, he made Fetters Hill erupt,[15] launching seeds into many cities of the world with the objective to transform them as well. As the damage he caused to reality was being reversed by Psylocke and X, Proteus was seemingly destroyed by Bishop and Rogue, who converted Kevin's energy and absorbed it, respectively, until he exploded.[16]

Proteus was brought back to life and using Xavier clones as host bodies. He became a member of the The Five, a group of mutants capable of combining their powers into a process of resurrection to bring back all the fallen mutants over the years. Proteus was living on the sovereign nation state of Krakoa for mutants, created by Xavier, Magneto, and Moira X, where he and the rest of The Five were considered something sacred to be treasured.

Because Proteus' powers lead to the destruction of its own body, The Five keep a backup Xavier body prepared for Proteus to inhabit after he burned out his current one. Depending on the frequency with which he used his powers, a body normally lasted one week, or even a single day during periods of excessive power use.

Xavier tasked The Five with resurrecting Marvel Girl, Cyclops, Husk, Archangel, Penance, Mystique, Wolverine, and Nightcrawler who died stopping the creation of Nimrod.[17] The Five had previously resurrected other long deceased mutants, such as Banshee, and Sophie and Esme Cuckoo.[18]

Kevin has been classified as an Omega Level Mutant.[18]

Kevin currently possesses a clone body of Xavier he uses as a host:

Proteus has no physical strength save for that which he gets from his host bodies.

Like this? Let us know!
Retrieved from "https://marvel.fandom.com/wiki/Kevin_MacTaggert_(Earth-616)?oldid=5892111"
Community content is available under CC-BY-SA unless otherwise noted.