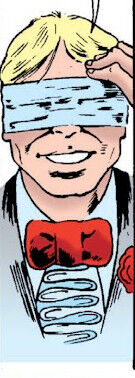 Kevin Mulhearn was once a member of S.T.R.I.K.E.'s Psi Division when the crime lord Vixen secretly took over S.T.R.I.K.E. Vixen sent her assassin Slaymaster after the psi division in order to silence them because they were the only ones to realize what was happening.[2]

After the remaining members of the division went into hiding, Kevin took a job at a theater as stage mentalist Doctor Destiny against the advise of Betsy Braddock. While on stage a member of audience addressed Kevin and asked what he had in his pocket. Kevin realized too late what was about to happen before he was gunned down in front of the entire audience.[2]

Kevin was also in a relationship with Alison Double, and they were psychically linked to each other when he was murdered. The result of his death traumatized her greatly.

Like this? Let us know!
Retrieved from "https://marvel.fandom.com/wiki/Kevin_Mulhearn_(Earth-616)?oldid=5670964"
Community content is available under CC-BY-SA unless otherwise noted.