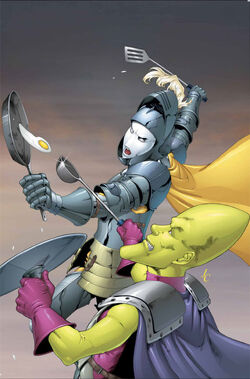 Kevin Sidney was born a fully activated mutant.[6] Hardly ever serious, Morph attempts to liven up otherwise tense situations with mindless banter, a defence mechanism he created to cope with the loss of his mother from lung cancer at a young age (leaving him with a hatred of cigarettes), and the hardships he faced while living with his father. He learned early on that his natural, bleached white and noseless appearance was not welcomed among his peers. Rather than be persecuted, he learned to stay in a human form for long periods of time. Once he became an X-Man, he decided that he no longer needed to do this.[6]

He has revealed little about his past, except for his involvement with his Earth's Avengers, X-Men, and New Mutants.

Morph is a hero from a parallel world who was a member of not only the X-Men, but also the Avengers. Unique son of loving parents, in his universe Morph, a shapeshifter, managed early on to use his powers, and so giving everyone what they wanted from him. A fairly good baseball player, a friend, a good student. Morph always used his power to keep everyone at ease with him, being at ease with someone as himself only with his parents. When his mother passed on, Morph tried in every way to cheer up his emotional distraught father, who, unable to let his suffering go, chose to enroll his son in a boarding school, that luckily happened to be the Xavier Institute for Higher Learning. Able to cheer up his fellow friends, the X-Men, he became their field leader, and soon became the most loved Avenger of his universe. Then the mysterious Timebroker appeared to him, explaining to him that he had become unhinged from time as a chain of events had caused his realities as he knew it to change. In that new reality a wounded Morph has become unable to maintain his form, and slipped into a coma, being only a white muddy substance in Beast's lab. Hoping to save his own future, he became a member and the comic relief of the Exiles, a group of universe-hopping heroes trying to save realities from ripples and alteration. He soon befriended his teammate Sunfire, and although he was interested in a romantic relationship, accepted the lesbian nature of his friend.[5] He always took care of her, and her death left him emotionally wrecked.[7]

Morph helped the team take down Proteus by impersonating the Maestro and weakening Proteus with a steel strip in his head. Morph went to take down Proteus but Proteus knocked the steel plate out of his head and took over Morph's body. He roamed around the multiverse possessed by Proteus. Proteus was then brainwashed with technology from another reality to believe that he is Morph. Due to the adaptive nature of Morph's body, the presence of Proteus does not burn out his metabolism. Morph's original identity and personality was believed to be dead at this point.[8]

The true Morph eventually returned and gave Proteus the chance for them to work together, and Proteus accepted.[9] However, Proteus was absorbed by the Crystal Palace in Morph's place. Later, Morph served in the role of Timebroker for a new team of Exiles.[10]

During a mission investigating a rift in timespace, Nocturne, Sabretooth and Morph got lost and separated.[11] Morph managed to reach a universe meant to serve as a meetup point, but the rest of the team never appeared. He instead stumbled into Blink and a new team of Exiles, who had been assembled by the Unseen of the Prime Marvel Universe to investigate the emergence of the mysterious entity called the Time-Eater. This reality where Morph was waiting for his teams was devoured by the Time-Eater, and Blink and her Exiles barely managed to escape.[12] Following the Time-Eater's defeat and the reversion of the damage he caused, Morph ended up reuniting with Nocturne in a Western world; however, they both fell under the mental control of the deranged Maniac Xavier.[11] Blink's new team arrived to this universe searching for Blink's old teammates, and they managed to free Nocturne and Morph and defeat Xavier. Unfortunately, after being fatally injured by Blink, Maniac Xavier used his final breath to retaliate against Morph. Morph died in Blink's arms moments later.[13]

Morph is a Mutant.

Malleability: He is composed of unstable molecules, which gives him the ability to shapeshift. His powers seem only limited by his great imagination and sense of humor. He can transform body parts and is a natural mimic of voices and sounds. He can change the chemical composition of his body into a gas or liquid. He can also change his color, stretch, contract, extort, compress, and expand his body or give himself virtually any superhuman physical power.[14]

Normal human strength that he can enhance up to being able to lift 20 tons.

Like this? Let us know!
Retrieved from "https://marvel.fandom.com/wiki/Kevin_Sidney_(Earth-1081)?oldid=6118857"
Community content is available under CC-BY-SA unless otherwise noted.