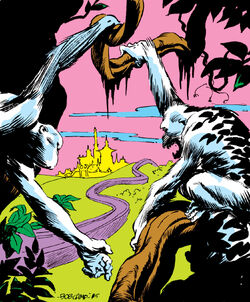 Khitai was a vast realm to the far east of the Hyborian world. Its civilization claimed to have ancient roots and to be older than the kingdoms of the west. The name Khitai itself became synonymous with tales of ancient wisdom, of secrets of arcane magic, and of mastery of the arts.[4][verification needed] The Khitans themselves were convinced of their cultural superiority and attempted to isolate themselves from the western "barbarians," by which they meant any foreigner. The terrain of their area favored them, as to the west of Khitai lay the vast Wuhuan Desert. Few travelers would risk crossing the desert and facing its nomadic tribes. Still the Khitans constructed a Great Wall as further protection from potential invaders.[4][verification needed]

Khitai apparently became known as China,[5] and Paikang is accepted as occupying the site of modern Peking (though the description of the vegetation open that assertion to doubt).[6]

The area within the wall was vast and diverse. Urbanized areas, fertile plains, bamboo jungles, and taiga forests were all part of Khitai.[4][verification needed] The land included also great deserts and volcanoes, where the Skirri had their hive-cities.[1]

There were many city-states, though Paikang reigned supreme among them, earning it the position of capital. It benefited from its location at the far end of a major trade route and was a center of industry and commerce. The marketplaces of the city offered drugs, silks, spices, gold, silver, jade, jewelry, artwork, and magical equipment.[4][verification needed]

The far south of Khitai comprised the so-called Lost Jungle, home to the poisonous Black Lotus and to a species of grey apes. It was once inhabited by the alien Yag-Kosha and his followers.[4][verification needed]

There was no real state religion. Many gods and demons have their own worshipers.[4][verification needed] There were allegedly a thousand[7] or nine thousand gods, including Cheng-Ho, goddess of the moon[8] and Yun[9] (who was worshiped by prayers and incense).[10]

Some practice rituals of human sacrifice, though it is not a universal practice.[4][verification needed]

The alien Yag-Kosha was worshiped in the Lost Jungle until he was taken away.[11]

Like this? Let us know!
Retrieved from "https://marvel.fandom.com/wiki/Khitai?oldid=5839463"
Community content is available under CC-BY-SA unless otherwise noted.