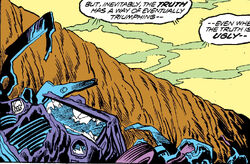 Kyshtym is commonly known as the Forbidden (or Dead) Zone.[1] The area was irradiated by a devastating nuclear explosion. Kyshtym used to be the name of a town. During the Cold War, the government of the Soviet Union contacted scientific experiments in the area. Sergei Krylov was a young geneticist who was employed there. He contacted experiments in genetic engineering, but was also placed in the forefront of nuclear research. In 1957, Krylov was responsible for a fatal mistake with radioactive waste disposal. The fatal error destroyed the town of Kyshtym.

The Soviet Union created the Forbidden Zone in part to hide another result of Krylov's experiments. He had accidentally created a Giant Amoeba which fed on atomic energy. Two decades later, Sergei Krylov returned to the area as the Presence. He attempted to destroy the creature, but was defeated and swallowed by the amoeba.[1]

The Presence and the Red Guardian joined forces against the Amoeba and managed to destroy. The two victors admitted their feelings for each other and decided to settle in the Forbidden Zone. The radioactive nature of their powers would endanger any people coming in contact with them, but there were no other people in the Forbidden Zone.[3]

Like this? Let us know!
Retrieved from "https://marvel.fandom.com/wiki/Khystym?oldid=4524232"
Community content is available under CC-BY-SA unless otherwise noted.