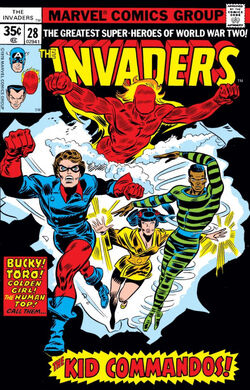 The Kid Commandos were a team of teenage costumed adventurers who aided the Invaders during World War II.[2]

Gwenny Lou Sabuki the daughter of Japanese-American scientist Dr. Sam Sabuki, was at the US battle in which the sidekicks James Barnes aka Bucky and Thomas Raymond aka Toro from the the Invaders fought the supervillain Agent Axis. One of Dr. Sabuki's inventions accidentally gives Gwenny Lou and one of her visiting friends David "Davey" Mitchell superhuman abilities. Gwenny became the Golden Girl, and Davey became the Human Top. [3]

The four heroes banded together to form a team and defeated Agent Axis.The team called the Kid Commandos, who ally themselves with the Invaders. The Kid Commandos fought Nazi espionage at home in America.[2]

After the war, Golden Girl and Human Top joined the V-Battalion.[4]

Like this? Let us know!
Retrieved from "https://marvel.fandom.com/wiki/Kid_Commandos_(WWII)_(Earth-616)?oldid=5850845"
Community content is available under CC-BY-SA unless otherwise noted.