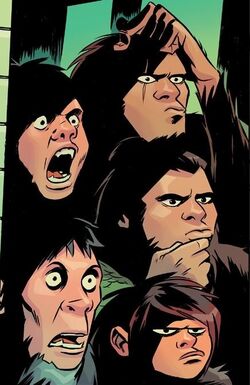 The Killer-Folk are an aggressive tribe of New Folk, native to the Valley of the Flame on Dinosaur World in Earth-78411.[1]

A Killer-Folk chieftan named Thorn-Teeth came into possession of an Omni-Wave Projector they called the Nightstone; however, their longtime rival the Small-Folk named Moon-Boy, and his partner Devil Dinosaur, frightened Thorn-Teeth and Gurf off, and then seized the artifact, but consequently Thok, Rachacha, and Tharg beat Moon-Boy to death.

When Coach Hrbek accidentally activated Lunella Lafayette's Omni-Wave Projector in another reality, it opened a portal across space and time to Earth-616, allowing the Killer-Folk to cross over into present day New York City. The Mutant Devil-Beast followed, looking to avenge the death of his longtime companion at the hands of the Killer-Folk.[2]

Retrieved from "https://marvel.fandom.com/wiki/Killer-Folk_(Earth-78411)?oldid=5235231"
Community content is available under CC-BY-SA unless otherwise noted.