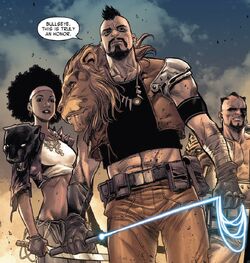 The Killer Kravinoffs were a trio of hunters that were the grandchildren of Kraven the Hunter. They considered themselves the heirs to their grandfather's legacy. The Killer Kravinoffs ran into Marshal Bullseye at the time he was pursuing Hawkeye to Kree Haven. Vladlena Kravinoff and her unnamed brother stated to Bullseye that the Red Skull had put a bounty on his head and they were taking advantage of that because of their status as hunters. Bullseye killed them all while getting wounded in the process.[1]

Retrieved from "https://marvel.fandom.com/wiki/Killer_Kravinoffs_(Earth-807128)?oldid=5529871"
Community content is available under CC-BY-SA unless otherwise noted.