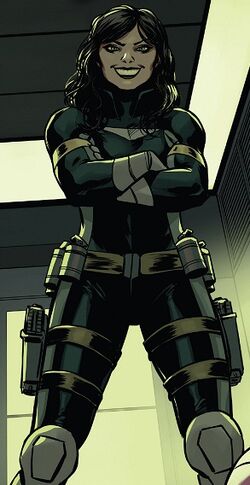 Morales, right? I've got some bad news honey... you just backed the wrong horse. See, the Facility has rules. And the most important rule? Don't @#$% with me. I think I'll push my finger through your eye. Maybe scratch my name on your frontal lobe with my fingernail.

Kimura was born to an abusive alcoholic father and a negligent mother. Her life at home also mimicked her life at school, where she was also abused and tormented by her peers. Through unspecified means and at some point in time, Kimura's grandmother became her caregiver. At once, her grandmother tried to heal the emotional damage inflicted upon Kimura through nurturing, love, and understanding.[1]

However, by that point in time the emotional scars were permanent and her grandmother's attempts to reach her were futile. After her grandmother's fatal heart attack, Kimura took off, eventually coming into contact with the Facility. She then underwent some unspecified procedure that granted her physical invulnerability, density control, and reconstruction.[2]

She then exacted revenge against those in her past who had wronged her. During her time at the Facility, Kimura eventually assumed the same abusive role as the people who victimized her in the past, particularly with X-23.[1]

She eventually tracked X-23 to San Francisco, where Laura lived with her Aunt Debbie and her cousin Megan. During a raid on Debbie’s house, Kimura broke X-23’s neck. She then used adamantium handcuffs to handcuff herself to Laura and drag her downstairs to Debbie and Megan where she began to put her finger through Megan's heart. Laura recovered from her injuries, cut off her own hand, and handcuffed Kimura to a pipe.[5]

Laura told Megan and Debbie to get her duffel bag, take what they absolutely needed, and that they had 3 minutes to leave the house. Laura reattached her hand while Kimura said that everyone she loved would die and that she would be the one who killed them. Laura cut open a gas pipe and turned on the pilot light, causing an explosion.[6]

Encounter with the New X-Men

The Facility later began targeting the mutant Mercury. When Mercury left the Xavier School grounds with X-23, Kimura and her team targeted her. Kimra and X-23 fought but she injured Laura and escaped with Mercury.[7]

When she arrived back at the Facility, she watched as they tested their new experiment, Predator X upon the mutant, Mammomax, much to her pleasure.[8]

Eventually, X-23 and Hellion tracked her to the Facility. She used a sonic device that only mutants could hear and stabbed X-23 in the shoulder. Hellion picked her up and smashed her into a wall. Laura told him to kill her, but he refused, and used his telekinesis to throw her away.[1]

Kimura eventually made her way back to the Xavier Institute and made another attempt to kill Laura. Emma Frost came across her and mind-wiped her, making her forget about her grandmother--the only influential and positive person in her life. Emma told Kimura that she was nothing but a bully who tried to harm others to make up for her own sad childhood full of sorrow and being bullied. Emma controlled Kimura’s mind and made her hunt down the leaders of the Facility, particularly Professor Harkins, who oversaw the experiments done on Cessily.[1]

Kimura spent months having her brain rewired after Emma Frost's attack and continued working for the Facility. This included supplying Viper with a Predator X which attacked Wolverine when he and the Punisher had both tracked it to Madripoor. Kimura was forced to take down the Predator X when the Punisher threw both her and himself into his open jaws.[9]

It was later revealed in more detail that Kimura had somehow failed to kill Harkins, but managed to give him a limp before she was freed from Emma Frost's mind control. She resumed working for the Facility, and when Agent Young and Agent Morales (who did not work for the Facility) managed to capture X-23, Kimura was ordered to handle and take a DNA-sample from her.[10]

Kimura decided to saw off X-23's entire arm. Morales managed to free X-23 by shooting Kimura in the head, but Kimura recovered quickly and chased them. X-23 trapped her under a heavy door and she was freed from it just in time to save Harkins from X-23.[10]

Harkins wanted X-23 alive so that the Facility could use her again, but Kimura wanted X-23 dead, and killed Harkins. Before she could kill X-23, Morales threw a Molotov cocktail that set her on fire. X-23 and Morales managed to escape, but Kimura survived and told X-23 that she would never stop hunting her, and that she would hunt down and kill everyone X-23 loved, starting with Megan Kinney.[11]

Kimura later resurfaced aiding the Sisters, as she desired vengeance against Alchemax Genetics for the theft of what she considered her property. She destroyed the installation where the girls were being held to facilitate their escape and further provided them with the weapons and equipment they used during their rampage. Following their success, Kimura took Bellona into custody as part of the agreement in order to retrieve the nanotechnology Alchemax implanted in her body. She allowed Gabby to go free in the care of Wolverine.[12]

In the intervening period, Kimura had seized control of a substantial part of Madripoor, absorbing the smaller criminal gangs one by one until she was left second only to Tyger Tiger. In order to rid herself of her rival, and to regain control of X-23, she set in motion a chain of events that lured Laura to the island, at which point she dispatched Roughouse and Bellona to capture her. Upon confronting the new Wolverine, she revealed she had located Megan and Debbie's hiding place, and used it as leverage against Laura committing suicide to prevent Kimura from using her again. After a week of torture, she unleashed Laura against Tyger, having infected her blood with the trigger scent during a previous assassination attempt. However Kimura's plans were thwarted by Gabby and Gambit.[13]

Kimura tracked the group to one of Tyger's safehouses, attacking the S.H.I.E.L.D. forces hunting Laura for the Daylesville massacre, and forcing a confrontation with Laura, Gabby, Gambit, Tyger, Jean Grey, and Laura's boyfriend Warren, the latter two having arrived to help break Laura of the trigger scent. During the fight, Kimura attempted to turn Laura against them with the trigger, only to discover it was no longer working, and fled as a general fight broke out. Laura and Warren set off in pursuit, and she shot and disabled the latter, forcing Laura down to rescue him from the ocean.[citation needed]

Handler and asset then confronted each other on the beach, with Laura determined to reclaim her life and put an end to Kimura once and for all. When Kimura smugly reminded her that there was nothing she could do to hurt her, Laura reminded her that even if her body and mind were indestructible, she still needed to breathe. Kimura finally met her end when Laura drowned her in the ocean shallows.[14]

You are a bully plain and simple. A product from your past... Being kicked around your whole life and alcoholic father and uncaring mother at home, only to find the same waiting for you from you peers in the schoolyard, day in and day out. You were born into a life you did not deserve... A life no child deserves. Someone needs to fill the role of the victim and you played that part for so many years until your grandmother came to your rescue. She called you her "sweet child." She did everything she could to undo the damage everyone else has done. But sadly she came too late, all that hope and good you held onto was beaten out long ago. After your grandmother's heart attack, you found your way to the Facility to the men that could give what you wanted badly... Revenge. A hollow prize, but one you begged for. And once you'd gotten the best of those who wronged you, you became the very person you hated and feared growing up. And X-23 played the role of your victim. Like you, Laura didn't deserve that horrible life, no child does remember? But you didn't care. Even though you knew all to well the pain she suffered, you enjoyed inflicting it. You still enjoy it. That's why you're a bully.

After finally getting her revenge on the people that tormented her throughout her childhood with the powers she received.[1] Kimura ironically became cruel and arrogant, not caring or even showing a hint of remorse for her actions. She had complete loyalty to the Facility and would go to any length to complete her task regardless of getting innocent people involved, so much that she even became the Facility's handler and enforcer. She took great pride in her position, mostly because she could harm and intimidate those who got in her and her allies way.[1]

Kimura was also extremely sadistic, taking great and overwhelming pleasure in harming others through torture. Kimura always enjoyed physically and verbally abusing X-23, beating her up whenever she misbehaved or failed a mission that was given to her. Even if Laura obeyed those orders without hesitation and fulfilled the missions she was sent on, Kimura would still abuse her out of exhilaration when she returned.[4] This also showed Kimura as a hypocrite, due to her own past of being abused and she did not even try to sympathise with Laura. Even though she knew full well that their pasts were similar, she didn't even consider the idea that she and Kinney might be the same. Even Emma Frost was deeply disgusted.[1]

Kimura was also xenophobic and disliked mutants, as she was happy to see firsthand Mammomax get consumed by the Predator X that Adam Harkins created.[8]

Kimura's body was designed specially to rival X-23 in an experimental process to achieve regeneration, the outcome being a small sub-conscious control of her own molecule structure.[citation needed]

Whatever The Facility provides. An example would be a sonic resonator she uses to subdue X-23 and Hellion when they attempted to save Mercury.[1]

Can be seen using a bow gun[15] and a high-powered rifle,[1] but will carry other weapons like grenades.[8]

Like this? Let us know!
Retrieved from "https://marvel.fandom.com/wiki/Kimura_(Earth-616)?oldid=5688585"
Community content is available under CC-BY-SA unless otherwise noted.