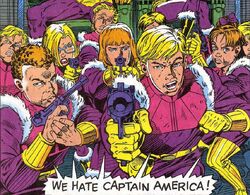 Helmut Zemo married the villain known as the Baroness, a woman who once claimed to be a reincarnation of Heinrich Zemo. The two lived together in the Castle Zemo ancestral home and organized the Kinder. Named for the Nazi Wunderkinder (Wonder Kids, a.k.a. the Hitler Youth), the Kinder were a group of abducted children, who were originally captured as part of a white slavery ring by Damon Dran. Zemo and the Baroness picked 25 children whom they deemed worthy and adopted them into their home in Castle Zemo. These children were essentially brainwashed into developing a fanatical devotion to the Nazi Party in general, and Zemo and the Baroness in particular. Captain America and his partner Diamondback followed a lead on the missing children and defeated Zemo and the Baroness, freeing the children.

Like this? Let us know!
Retrieved from "https://marvel.fandom.com/wiki/Kinder_(Earth-616)?oldid=6442989"
Community content is available under CC-BY-SA unless otherwise noted.