Marvel Database
Register
Don't have an account?
Sign In
Advertisement
in: King in Black (Event), Comics, King in Black: Return of the Valkyries Vol 1,
and 61 more
English

King in Black: Return of the Valkyries Vol 1 1

View source
watch 02:56
Doctor Strange in The Multiverse o Madness - The Loop
Do you like this video?
Play Sound
Part of the King in Black event

King in Black: Return of the Valkyries Vol 1 #1

On a desolate battlefield, the original nine Valkyrior charge into battle against a dark god, who fires a volley of black arrows. Wounded, one of the Valkyries - a dark-skinned woman with dreadlocks - reaches for her axe, only to find it pinned beneath the foot of the dark god. Desperately, she thinks to herself that she doesn't want to see the death of her lover again, unable to bear the weight of her failure.

In Earth's orbit, the Sentry's ghost sits on a meteorite looking down at his shredded corpse and waxes poetical about death to Valkyrie - the apotheosized form of Jane Foster. As the Sentry apologizes - saying that actually dying is a new experience, Valkyrie introduces herself and remarks that dying is a new experience for everyone. The Sentry remarks that when he died his life flashed before his eyes, showing him the happy moments of his life - his time before becoming the Sentry, his wife Lindy, and his pretege Billy Turner among them. Recalling a specific moment, the Sentry comments that while Knull was ripping him apart he was remembering he once told Lindy a joke so funny she dropped the plate she was washing and peed herself laughing. As the Sentry morosely states that Death has a weird sense of humor given he's caused more suffering than smiles, Valkyrie corrects his misgendering of the Abstract Entity and assures him he's not as bad as he believes himself to be. Conceding that she might be right, the Sentry recalls when he first flew into space - just to see if he could - and gestures towards the Earth, encased in a shell of living abyss. Lamenting his failure to stop Knull, the Sentry states he wishes he could have at least taken the dark god down with him. Valkyrie attempts to console him by saying that the sum of his life matters more than how he died, but he states that when death is all that's left how one dies is still important. As she tells him to come with her to Valhalla, Valkyrie glances at the Earth - concerned by the massive Death Ball she sees looming over the planet.

The last of the original Valkyries finds herself at a tavern and orders a drink form the bartender - an alien woman - who gives her a baseball bat to go with it. As a patron picks up a chair, the last of the original Valkyries smashes him with the baseball bat and thinks to herself that she probably had it coming, but as she picks up her drink she sees a message scratched into the bar-top warning her that she's not actually dead and that this is a trap. Grumbling that she knows this already and just wants to finish her drink, she sits back down as another customer picks up a piece of the chair to use as a shiv.

In the Realm Between, Valkyrie steers Mr. Horse through the white void - a place she still doesn't fully understand. To make conversation, she asks the Sentry - who is seated behind her - what the joke he told Lindy was, but is unimpressed when he tells it to her. Coming across a decapitated Celestial, Valkyrie marvels at its immense size and then notices something emerging from the biomechanical flesh of its neck-stump - a manifestation of the countless vengeful souls it claimed as part of the Celestials' mission to guide the development of life across the cosmos.

Kicking a drunkard out of the tavern, the last of the original Valkyries cuts off the bartender - telling her not to use her real name - before saying it's the least she could do. Coming to the epiphany that the world around her isn't real, she is struck by a sudden sense of deja vu and correctly predicts the words of a man who scolds her just before he says them. Hearing the sound of an axe hitting wood.

Transforming Undrjarn into a greatsword, Valkyrie lunges at the amalgam of vengeful spirits, which spawns biomechanical warriors to attack her. As she hacks into them, she sees glimpses of its constituent souls' lives as they died.

The Unnamed Valkyrie turns to find herself on Asgard alongside Alta, one of the other original Valkyries - who comments that she smells like a bar-fight. As Alta throws a pair of battleaxes at a target and hits a bullseye, the Unnamed Valkyrie brushes the comment off and remarks that she doesn't see the utility of bringing throwing axes into battle. Smirking, Alta turns and kisses her - the Unnamed Valkyrie realizing she's remembering their awkward first kiss before fondly recalling the many others they'd shared. Hearing Jane Foster's voice shouting for Mr. Horse to get the Sentry out of danger, the Unnamed Valkyrie starts to turn around; but Alta assures her there's no-one there. Inwardly, however, the Unnamed Valkyrie admits to herself that the scene is a lie, and that somewhere out there someone real is in danger.

As Valkyrie slashes at the mass of vengeful spirits and possessed Celestial flesh, Mr. Horse refuses to leave without her; Valkyrie snapping that they're after the Sentry. Retorting that he can still fight, the Sentry spurs Mr. Horse towards the mass - the Valkyrie attempting to warn him back by saying they're fighting vengeful souls corrupted by the Celestial's corpse and that some fates are worse than death.

Back on the alien battlefield, the Unnamed Valkyrie charges into battle against a dark god - realizing it's not real because it's not horrifying enough. Distracted by her thoughts, she's impaled through the heart by one of the dark god's spears - stammering to herself that it's not real.

Once there was an entire army of Valkyries, but now Jane Foster is the only one. When the King in Black comes to Midgard, Jane must rebuild the Valkyries to help stop him -- starting with Hildegarde, a warrior from Asgard’s own hallowed halls, and X-Man Dani Moonstar, a former Valkyrie herself. But what Jane doesn’t know…is that she never was the only Valkyrie after all. Who is the fourth warrior? Jason Aaron and Torunn Grønbekk team up with artist Nina Vakueva for a story that will rock the foundations of the Marvel Universe! 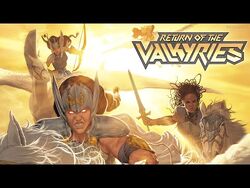 KING IN BLACK- RETURN OF THE VALKYRIES -1 Trailer - Marvel Comics