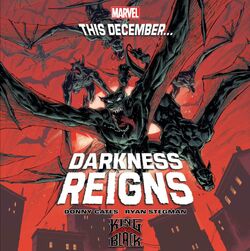 Decades ago, a teenage Namor McKenzie was sent as a diplomatic envoy to the Chasm People's outpost in the Orreki Reefs in a bid to arrange a union between them and the Atlantean Empire. After helping foil a coup against King Attukar of the Chasm People, Namor and his future nemesis Attuma were sent to accompany the elite squad Swift Tide on a mission to retrieve an ancient dark artifact called the Unforgotten Stone.[1] The mission ended in disaster, with the Swift Tide being corrupted into monsters by the Unforgotten Stone's eldritch power,[2] redubbing themselves the Black Tide. The Black Tide slaughtered the Chasm People present at the Orreki Reefs, including King Attukar,[3] and were ultimately banished to the depths of the Mariana Trench.[4]

During the time Spider-Man was the host of the symbiote later known as Venom, a dark entity called Mister E attempted to conquer the Earth in service of his lord and master - the dark god Knull. Witnessing a future where he succeeded, Kang the Conquerer attempted to prevent this from coming to pass, recruiting Rocket Raccoon to his cause. Coming into conflict with Spider-Man, Mister E was confused as to why one of its brethren would be subservient to its host and try to stop its plan.[5] When Black Knight intervened, Mister E impersonated Merlin to lure him into a trap and stole the Ebony Blade - intent on destroying it out of the belief it could be used to vanquish Knull.[6] Stealing an experimental Quinjet, Mister E took the Ebony Blade to the troll blacksmith Ulicia on Knowhere; pursued by Kang, Rocket, Spider-Man, the Black Knight, and Captain Marvel.[7]

Unleashed from Klyntar, Knull and his horde blaze a swath of destruction across the cosmos en route to Earth - destroying multiple planets,[8][9] waylaying a fleet of Kree/Skrull Alliance ships and slaughtering or infecting their crews,[10] and settling his eons-old grudge against the Celestials by killing and/or infecting them with symbiotes.[11] Focusing his attention on Earth, Knull dispatched symbiote-dragons across the cosmos to cause as much widespread destruction as possible, one of them attacking Spartax and slaughtering two billion of its inhabitants in the space of four standard hours before being slain by the apotheosized Star-Lord.[12] Other symbiote-dragons began laying waste to Zn'rx territories, precipitating a Snarkwar amongst the various factions.[13]

Sensing that Knull's arrival on Earth is imminent, Eddie Brock alerts the Avengers and takes his son Dylan to the secret bunker made for Spider-Man by Ezekiel Sims. As hundreds of thousands of Symbiote Dragons fly through space towards Earth, Iron Man uses derelict warships left over from the war with the Cotati as a minefield - only managing to kill a hundred of them. The Avengers contact Mayor Wilson Fisk to warn him of the danger, but Fisk disregards the warning to evacuate the city, assuming that it's a trick to discredit him.[14] As the Avengers and Fantastic Four rush to evacuate Manhattan, the symbiote dragons make landfall and start cocooning the city in symbiotes. As Doctor Strange, the X-Men, and numerous street-level heroes join the evacuation effort, Eddie makes his way to Dark Carnage's Spire and connects to it using the Venom symbiote - intending to hack into the Symbiote Hive-Mind and hijack control of the symbiote dragons. Before Eddie can attempt to do so, symbiote-controlled Celestials arrive and Knull emerges demanding to be given the human called Brock in exchange for making Earth's destruction swift and painless.

The Sentry arrives and attempts to rip Knull in half, but is effortlessly overpowered and torn in half himself. Absorbing the Void, Knull forcibly bonds symbiotes to most of the remaining heroes and then envelops the Earth in a shell of living abyss. Venom decides to surrender to Knull in order to buy the remaining heroes time to escape, alerting Knull to his location. Knull grabs Venom and takes him to the top of the Empire State Building, where Venom offers to serve him if he spares Earth. Knull refuses and informs Venom that the Brock he wanted was Dylan, ripping the symbiote off Eddie before dropping him.[11] Eddie is mortally wounded and left comatose, Spider-Man taking him to the Fantastic Four for medical treatment.[4] Sacrificing himself to buy time for Spider-Man to escape with Eddie, the Human Torch is taken over by a symbiote, as is his soulmate Sky and the Thing.[15]

Disregarding the evacuation order to attempt a major heist, Black Cat is caught off-guard by Knull's attack and barely manages to escape, horrified by witnessing the Avengers' last stand. Barely escaping and making her way to Alchemax, she recruits Doctor Steven to provide her with the means to save Doctor Strange.[16]

As the symbiote shell encases the Earth, Knull's symbiote-dragons attack major cities around the world, attempting to devour everyone they come across or spawning symbiotes that take over civilians, heroes, and villains alike.[17][18][14][19] Knull sends a symbiote-dragon to hunt down the Black Knight, seeking to claim the Ebony Blade for himself; leading to a showdown in Shanghai between the Black Knight, Aero, Sword Master, and one of Knull's avatars in the shape of the dark god Chiyou. Coming to terms with his inner darkness, the Black Knight stops Knull from claiming the Ebony Blade and Sword Master's Sword of Fu Xi; the three heroes disembarking to Manhattan to take the fight to Knull.[17]

In the hours that follow Knull's initial victory, the X-Men withdraw from the global defense effort to focus on defending Krakoa, while the remaining Fantastic Four, Iron Man, and the Black Panther attempt to rally as many allies as they can - including arranging a truce with Namor and sending him to recruit the Black Tide, sending Blade to recruit Count Dracula, and contacting the Mayor Fisk to recruit New York's supervillains.[4] Taking the loss of several of his bodyguards, constituents, and reputation personally,[20] Fisk forcibly recruits a team of supervillains from the Bar with No Name, dubs them the Thunderbolts, and sends them to find Norman Osborn.[21]

Wakanda is nearly overrun by symbiotes, but the Black Panther repells the attack by using Wakanda's forcefield to amplify Klaw's severed sonic cannon -- punching a hole through the symbiote barrier encasing the Earth -- and summoning the Hand of Bast to combat a symbiote-dragon spawning the horde.[18] Iron Man captures a symbiote-dragon to heal Eddie, but is unable to successfully sever its connection to the Hive Mind; forcing Dylan to reveal his powers to kill it. As Mister Fantastic jubilantly lauds Dylan as their ace-in-the-hole, everyone notices that Eddie has succumbed to his injuries and died.[4] His consciousness trapped in the symbiote hive-mind as a codex, Eddie is reunited with Tyrannosaurus (Rex Strickland) and Agent Anti-Venom (Flash Thompson); recruiting them to help retake the Venom symbiote from Knull and destroy the Hive from the inside.[23]

Using an unstable mixture of Astrobiological Serum and Weapon V's Sym-Soldier Suits, Black Cat is able to rescue Doctor Strange with the help of Bats, incurring the wrath of a horde of symbiote dragons. To fend them off, Black Cat uses a piece of the staff that Dr. Strange had crafted from the wood of Yggdrasill to augment herself with the divine power of Asgard.[24]

Despite some symbiote-related setbacks, Fisk's Thunderbolts find Osborn in the Ravencroft Institute, and he proposes recruiting the Sentry to fight Knull -- not knowing the Sentry has already been killed. Star is able to track the Sentry's energy signature and leads the Thunderbolts to the lower half of the Sentry's body, which Taskmaster proposes turning into a cosmic energy nuke to use against Knull.[21] Iron Man blames himself for Eddie Brock's death, but is snapped out of his funk by Doctor Doom, who attempts to persuade him to share his symbiote-augmented armor under the pretense of using it to defeat Knull.[25]

The Quiet Council of Krakoa dispatch the Red Queen and her Marauders to rescue Cyclops and Storm, though they are side-tracked rescuing a ship belonging to human traffickers, marooning the slavers and giving the refugees sanctuary on Island M.[26] As Knull's forces attack Krakoa, S.W.O.R.D. director Abigail Brand dispatches re-enforcements to Krakoa while surreptitiously sending Mentallo to take the Five off-planet, but they are all defeated by the symbiote-possessed Cable.[27] Brand dispatches Manifold to try recruiting extraterrestrial aid, and though he is unsuccessful he discovers that Alpha Flight's acting commander Henry Gyrich is a mole for Orchis and that there is a mole in S.W.O.R.D. as well.[13]

Seeking revenge for his father, Dylan enters the field and frees Captain America from Knull's control, but is attacked by Knull. Before the dark god can capture him, Thor arrives and battles the dark god. Using all his strength, Thor manages to smash off Knull's lower jaw with Mjolnir, but Knull reforms it from living abyss and impales him with his Necrosword, directing the symbiote-controlled Celestials to destroy the city. Iron Man uses his symbiote-augmented armor to hijack control of one of the symbiote-possessed Celestials, while Thor -- mortally-wounded -- sends Huginn and Muninn to find the Silver Surfer and bring him to Earth.[28] Within the Hive-Mind, Eddie, Rex, and Flash manage to infiltrate the God-Hive - the Hive-Mind's core - and Flash takes over a symbiote that had been disconnected from Knull's control by Thor, incarnating in the world of the living as a symbiote-dragon. Furious, Knull takes over Rex's symbiote and confronts Eddie within the Hive-Mind.[29]

Knull ensnares Dylan in a sphere of living abyss and attempts to corrupt him, but Dylan tricks him with help from Marvel Girl and frees Cyclops, Doctor Strange, the Human Torch, the Invisible Woman, Thor, and Storm. Namor and the Black Tide flood New York, and Thor and Storm electrocute the symbiotes to sever them all from Knull's control. Furious, Knull attacks Dylan but is stopped by Marvel Girl, who attempts to read his mind to find his weaknesses. Initially despairing, she discovers his connection to the God of Light. Arriving at Earth, the Silver Surfer absorbs the God of Light into himself and phases through Knull's barrier, unleashing it to find its chosen host. Just as Reed Richard realizes the God of Light is the Enigma Force, it resurrects and bonds to Eddie Brock - turning him into Captain Universe.[30]

As Christmas approaches, the remaining civilians of New York City adjust to the new status quo and carry on with their lives - decorating the city and purchasing presents even at the risk of being eaten by rampaging symbiotes.[31]

As Namor had feared,[4] the Black Tide refused to return to their exile and disappeared in the wake of Knull's defeat, leading to Namor hunting for them with the help of his Defenders of the Deep.[3] 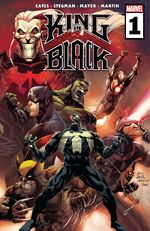 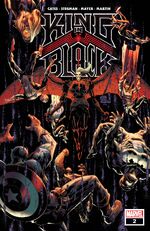 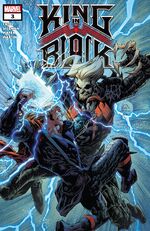 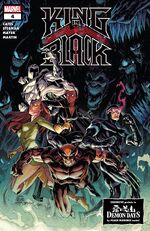 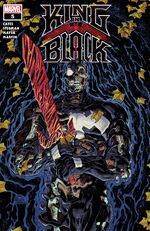 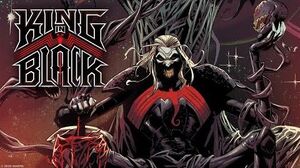 Retrieved from "https://marvel.fandom.com/wiki/King_in_Black_(Event)?oldid=6097046"
Community content is available under CC-BY-SA unless otherwise noted.