Ah... I see my reputation precedes me... so I won't waste your time... I am going to kill your world.

Appearing in "Chapter One: Reign"

Synopsis for "Chapter One: Reign"

Standing on the roof of a high rise overlooking the nighttime cityscape of Manhattan, Eddie Brock senses that Knull has finally arrived. Contacting the Avengers, Eddie alerts them to implement the plans they developed and leaps off the roof, transforming into Venom. Arriving at the penthouse where he's been staying, Eddie gazes down at his sleeping son, Dylan, and laments having passed down a legacy of darkness and death to him. Rousing him, Eddie starts to explain what's going on but Dylan says he can sense Knull's presence.

At the Avengers Mountain, Captain America barks orders as he, Iron Man, Hulk (Jen Walters) and Captain Marvel watch a set of screens monitoring Earth's orbit for any sign of Knull's horde. Iron Man remarks that based on the intel Venom gave them, Knull and the symbiotes don't emit heat signatures to track, but that either way they'll run into the derelict Kree and Skrull warships left behind by the war against the Cotati - which he's turned into a makeshift minefield. Smirking, Captain America remarks that Tony just likes turning things into bombs, Tony asking if he's heard any intel from their secret weapon. Captain Marvel interrupts, saying that they've got incoming as countless Symbiote Dragons emerge from the depths of space and soar into the minefield. Grinning wickedly, Iron Man detonates the ships... but his triumphant boast trails off as he sees the massive explosions only managed to destroy a few hundred of the hundred-thousands of symbiote dragons. Descending a flight of stairs followed by Dylan, Eddie staggers as he feels the dragons' pain and rage through the Venom symbiote, who urges him to hurry. Bolting from the control room, Captain America orders all teams to move out immediately - the Avengers and Fantastic Four arriving in Manhattan to see symbiote dragons falling from the sky like a torrential downpour.

As Eddie leads Dylan to the bunker Ezekiel Sims had built - on loan courtesy of Spider-Man - Dylan protests that he can help fight and try to use his powers to turn Knull's horde against him, but Eddie refuses to put his son in harm's way. As the bunker's door closes, Dylan tearfully asks Eddie to come home safely, Eddie responding that he loves his son. Captain America contacts Eddie over a comm unit and tells him it's time for Plan B, Eddie mentally noting that means all hell's broken loose.

Symbiote dragons soar through the skies over Manhattan as living abyss encases the skyscrapers and high rises of the city. On the ground, the Avengers work with Doctor Strange and street level heroes - particularly those with electricity-based powers, like Lightning - to evacuate civilians as symbiotes rain from the sky and flood the streets with living abyss. Eddie notes that Knull's only known weaknesses are electricity, cosmic powers, and maybe magic; leaving them short-staffed. Captain America radios Iron Man and asks if he's heard any word from Thor, informing him that many of the dragons are exploding into a deluge of symbiotes that sooner or later will seek out hosts. Remarking that he hasn't, Iron Man notifies them that their other heavy-hitter is en route, but Captain America snaps that they need backup immediately. Professor X telepathically cuts in on the conversation and offers the aid of the X-Men, deploying Cyclops, Storm, Cable, Marvel Girl, Wolverine, Nightcrawler, and Magneto in Washington Square Park. As Xavier lauds Storm - apotheosized into a goddess of the sky - as a suitable substitute for Thor, Ororo snaps at him that she needs to concentrate as she blasts symbiote dragons with lightning.

Noting that Thor and now Storm were supposed to be the second phase of Plan B, Venom makes his way through the sewers to the ruins of the Spire - Dark Carnage's lair - to initiate the third phase. As Venom locates Kasady's throne of living abyss and connects to it, Eddie mentally notes that the second phase of Plan B was to use heavy hitters like Thor and Storm to sever Knull's connection to as many of the symbiote dragons as possible, with the third phase being Venom seizing control of them himself using the throne - though Eddie notes it's equally possible that Knull will sense them right away and seize control of the Venom symbiote again.

In the streets above, Doctor Strange verbally, mentally, and mystically calls out for backup as the symbiote dragons chew through his defensive spells as quickly as he can cast them, Storm likewise calling out for assistance as she is overwhelmed by sheer numbers. Eddie protests that he's almost through to the core of the Hive Mind, Iron Man urging him to hurry as Doctor Strange is swallowed whole by one of the dragons. Breaking through, Eddie reacts in horror and tells everyone they need to flee immediately and that the symbiote dragons are the least of their worries: en route to Earth, Knull settled his eons-old grudge against the Celestials and took them over with symbiotes. A trio of symbiote-possessed Celestials - among them Arishem the Judge and Tefral the Surveyor - appear in the sky over Manhattan and touch down. Tefral's chest opens and Knull himself emerges, brandishing his Necrosword and calmly declaring his intent to destroy Earth, adding that in the meantime he is looking for a human named Brock and is willing to make their deaths quick and painless if they surrender. As Captain America orders his team to fall back, Knull manifests draconic wings from his symbiote-armor and swoops towards them, mockingly calling them a welcoming party for his coronation and asking who they all are. As Iron Man informs him that their secret weapon is ready and waiting for orders, Captain America retorts that normally they're the last thing supervillains like Knull ever see, but that today they're going to sit back and watch.

On Captain America's command, the Sentry - restored to his original golden form - dives out of the sky and punches through Tefral's head. Enraged, Knull wheels around to face the interloper, but the Sentry grabs him and ascends to the edge of space, calmly introducing himself as he attempts to rip Knull in half like he once did to Carnage. Easily overpowering the Sentry and reversing their positions, Knull sneers that he already knows who he is - remarking that the Hive has memories of him once killing Carnage. As Knull grabs his face, the Sentry eyes turn black with glowing red irises as the Void attempts to take over him. The Sentry snaps at Knull to stop lest the dark entity inside him be unleashed, but Knull rips the Sentry in half - in the same way the Sentry had once killed Ares - and the Void bursts from his corpse. Declaring that he is the Lord of the Abyss and that the darkness inside the Sentry bows to him, Knull grins wickedly and absorbs the Void into himself.

As Venom and Captain America react in disbelief and horror, Iron Man urges Captain America to retreat immediately, but Captain America declares his intent to sacrifice himself holding the line. Knull interrupts his heroic speech, mockingly asking if that was the best they could come up with and remarking that he's disappointed, having been expecting a difficult battle with worthy opponents. Raising his hand, Knull causes the living abyss covering the ground to engulf the heroes and claim them for his army - with only a few such as Spider-Man escaping. Raising his hand, Knull shapes the horde of symbiote dragons into a Dyson Sphere of living abyss that encases the entire Earth, cutting it off from the Sun and the stars. Blasting lightning omnidirectionally, Storm demands to know what's going on and Iron Man informs her of what just happened. Turning his attention to the sky-goddess, Knull manifests a massive hand of living abyss and snatches her from the sky, claiming her for his horde as well. As Professor X sits in shocked silence, Iron Man contacts Venom and demands to have some good news.

Disconnecting from Dark Carnage's throne, Eddie replies that he and the Venom symbiote are going to try a hail mary plan: giving Knull what he wants. As Iron Man protests that Knull will destroy the world either way, Eddie says they'll try to buy him some time to come up with a way to win. Removing his comm unit and tossing it aside, Eddie asks the Venom symbiote if it's ready for one last dance. Saying that it is, the Venom symbiote tells Eddie that no matter what it loves him, and connects to Knull's Hive Mind. Grinning, Knull plunges the massive hand of living abyss through the street - ripping through the roof of the Spire and grabbing Venom. Perched on the roof of the abyss-encrusted Empire State Building, Knull grabs Venom by the throat and gloats that the world of darkness he has created is so much more beautiful than the Light. Venom offers to serve Knull if he spares the Earth, but Knull remarks that he recognizes Eddie as the one who killed the Grendel and growls that he thought he'd already killed him. As Knull chuckles to himself and remarks that minds are funny like that, Eddie asks what he means. Knull remarks that he should have specified that the Brock he wanted wasn't Eddie but Dylan. Horrified and furious, Eddie begs Knull to leave his son alone and take him instead. Knull pretends to contemplate Eddie's offer before refusing and ripping the Venom symbiote off him, absorbing it into his own symbiote as he says he's taking his child back and will take Eddie's from him as well. Remarking that he no longer has any use for Eddie, Knull lets go and sends him plunging towards the symbiote-covered streets below.

After a campaign across the galaxy, Knull’s death march arrives to Earth and, worse yet, he hasn’t come alone! With an army of hundreds of thousands of symbiote dragons at his command, the King in Black is a force unlike any Earth’s heroes have ever faced. Eddie Brock AKA Venom has seen firsthand the chaos that even one of Knull’s symbiotic monsters can wreak – will he survive an encounter with the God of the Abyss himself?

From Donny Cates, Ryan Stegman, JP Mayer, Frank Martin and VC’s Clayton Cowles comes the definitive chapter in their two-year-long VENOM saga that changed everything you thought you knew about symbiotes! 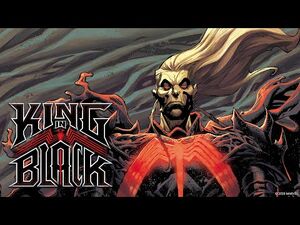 Retrieved from "https://marvel.fandom.com/wiki/King_in_Black_Vol_1_1?oldid=6453885"
Community content is available under CC-BY-SA unless otherwise noted.