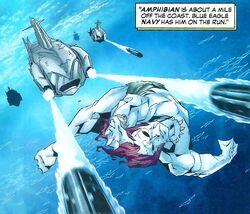 Kingsley Rice was a founding member of the Earth-712 team the Squadron Supreme. He served with the team for some time, clashing with the Avengers and being defeated by Hellcat who had been sent to the Squadron's Earth by minions of the Serpent Crown.[1]

He left the Squadron when they implemented their Utopia Program, whereby they took over the government of the United States, and introduced policies such as the artificial behavior modification of criminals. Although he voted against implementing the Utopia Program, Kingsley continued to serve with the team for a while despite his reservations.[2] However, once the team began to behavior-modify criminals, including behavior-modifying their former enemies the Institute of Evil to join the Squadron, Kingsley was among the members who quit the team in protest at this radical plan. Having been outvoted earlier when he suggested the Squadron's headquarters be located nearer his beloved ocean, Kingsley was glad to return to its depths and vowed not to leave it again.[3]

Due to his quitting the team, Kingsley was not involved in the battle where another member who quit the team in protest, Nighthawk, led a team called the Redeemers to overthrow the Squadron and their Utopia Program.

After the Squadron had dismantled the Utopia Program, and had returned from a sojourn on Earth-616, Kingsley was invited to rejoin the team, and accepted.[4]

Kingsley can communicate with sea life and is an excellent swimmer.

Kingsley possesses superhuman strength thanks to his adaptation to the ocean's depths, meaning he can lift around ten tons.

Like this? Let us know!
Retrieved from "https://marvel.fandom.com/wiki/Kingsley_Rice_(Earth-712)?oldid=6056455"
Community content is available under CC-BY-SA unless otherwise noted.