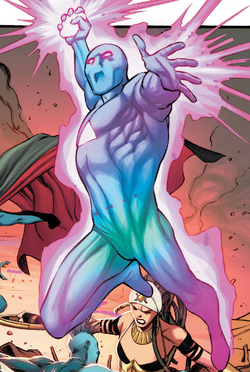 Kinji was a member of the Squadron Sinister who operated out of the province of Utopolis. Due to the power and cohesiveness of the team, Doctor Spectrum, as well as the rest of Squadron Sinister, annexed many other provinces like the Supremia Province from their counterparts, the Squadron Supreme. Spectrum obliterated Zarda for her non-compliance.

Doctor Spectrum and the Squadron headed back to the citadel to discuss ongoing events involving the Frightful Four, but the topic of invading the Shadow Province was brought up by Knighthawk as he heard they had a weapon strong enough to stop Hyperion. However their meeting was interrupted by the Iron Thor who wanted to talk to Hyperion.

Later on, Kinji went to Nighthawk's laboratory to claim the other Spectrum's Power Prism as he believed that he was the rightful owner. Nighthawk told him that he was unable to detach the prism from the hand of the dead body, so this prompted Kinji to leave as they were ready to have another council meeting.

Back at the hall, Kinji and the others learned about the death of the Thor. Worried that the Corps would come to investigate, Hyperion assured them it would take at least two day for that to happen and in the meantime he wanted to keep it a secret until they got ahold of the Argonite weapon. Later that night, the Squadron attacked the Shadow Province before they knew what it them. Doctor Spectrum created an energy construct of a dragon to attack the members of the Order of St. George while allowing Nighthawk the time to sneak into the lower dwellings to grab the weapon thus gaining the victory.[1]

After a few days had past, Doctor Spectrum was with the Squadron when they had a meeting with the Frightful Four in the Wastelands. They confronted the Four about their supposed annexation of Europix. Hyperion suggested that the Four should let the Squadron handle Europix or they would suffer the consequences. But the Four ended up attacking Europix anyways which caused Spectrum and the others to intercede. Kinji blasted the Wizard with his prism off of Nick Fury as the two was fighting. He then trapped Bentley in a containment field while Hyperion told him that he could have stayed alive if he had stayed in Wittland. But instead Spectrum used his power to shatter the Wizard's body resulting in his death.[2]

Doctor Spectrum was present during the confession of Paste Pot Pete who blamed the Whizzer for being a traitor. After seeing Sanders die from Hyperion's optic blast, Kinji traveled with Nighthawk to Nutopia in order to spy on Warrior Woman's own betrayal as a spy for the Nutopians. Kinji thought it would be a good idea to tell Hyperion about what they had witnessed by Nighthawk advised against this as Warrior Woman was going to pin the death of the Thor on Spectrum in order to take their most powerful player off the board. Kinji became scared about the idea of Hyperion killing him so he decided to flee the provinces so he wouldn't be found.[3]

When Reed Richards restored the multiverse, Doctor Spectrum and the entire Squadron Sinister were resurrected in Earth-21195; however, their Earth soon faced a new cataclysm of unknown origin and thus they built a portal in Cosmopolis, New Troy to escape their dying world. Unfortunately the portal was designed to only transport one person at a time, and took too long to build, thus the Squadron turned on each other, fighting to determine whom would be the first to escape. The others underestimated Zarda because she was a woman, and she used that to her advantage to slay her teammates and pass through the portal into the Exo-Space between realities.[4]

Seemingly those of the Kinji Obatu of Earth-616.

Seemingly those of the Kinji Obatu of Earth-616.

Like this? Let us know!
Retrieved from "https://marvel.fandom.com/wiki/Kinji_Obatu_(Earth-21195)?oldid=5672601"
Community content is available under CC-BY-SA unless otherwise noted.