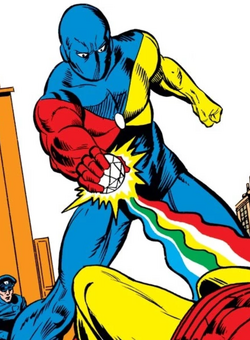 Yes, Iron Man -- You have been tricked!

Obatu was a member of the first Squadron Sinister they were sent to fight against the Avengers in a competition between the Grandmaster and Kang the Conqueror.[2]

Dr. Spectrum reappeared, attacking a Stark construction site in Detroit while Tony Stark was working there. Iron Man battled him, but the fight was inconclusive and Spectrum escaped.[3] Spectrum attacked him again while he was being congratulated by the mayor of Detroit. After Iron Man's ultraviolet light proved superior to Spectrum's Power Prism, Spectrum fled once more. Obatu then approached Stark in his civilian identity and asked to hire Iron Man as his bodyguard when the entity Rokk appeared, threatening Obatu's life. Rokk kidnaped Obatu and went after Roxanne Gilbert, having telepathically sensed a connection between her and Stark. Tony (as Iron Man) pursued Rokk to Roxanne's organic food store. Just as Rokk was nearing defeat he vanished; Dr. Spectrum appeared and revealed that he created Rokk with the Power Prism to wear him down.[4]

Still, Iron man managed to escape. As Spectrum searched for his foe he found Iron Man near Roxanne and attacked. Iron Man was swiftly beaten and the Power Prism decided to make Iron Man the new host for its power.[5]

Obatu was deported back to Uganda where he stood trial for crimes he had committed. Sentenced to death, he fled from the firing squad and allied himself with a witch-doctor. He and the witch-doctor wound up fighting the Black Panther, Brother Voodoo and the Thing. During the battle, Obatu fell over a balcony to his death.[7]

Kinji Obatu had his powers from the Doctor Spectrum's Power Prism.

The Power Prism has one weakness: Doctor Spectrum is vulnerable to ultra violet light.[5]

Like this? Let us know!
Retrieved from "https://marvel.fandom.com/wiki/Kinji_Obatu_(Earth-616)?oldid=4983160"
Community content is available under CC-BY-SA unless otherwise noted.