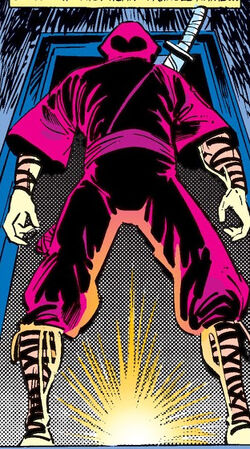 Deadly assassin of The Hand and faithful servant of their then present "Jonin". Kirigi has been said will not die. He survived impalement by his nemesis Elektra and continued to pursue the female assassin after a short recuperation. Elektra next decapitated Kirigi and this seemed to end or severely curtail his existence.[1]

However, Kirgi's head and body were reattached and reanimated by the Hand and he returned to attack Daredevil and his allies. This time his body was destroyed by fire which appeared to end his life again. After he fell, agents of Stick destroyed his body.[2]

Rumored that he cannot die

He is capable of lifting at least 1,000 pounds.

Like this? Let us know!
Retrieved from "https://marvel.fandom.com/wiki/Kirigi_(Earth-616)?oldid=4013704"
Community content is available under CC-BY-SA unless otherwise noted.