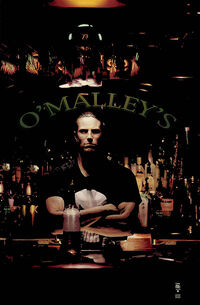 After a Hell's Kitchen bar is blown up, which the Punisher happens to be in, he is drawn into a gang war between four Irish gangs vying for $10000000 supposedly left behind by Nesbitt, a former gang leader who made all of their lives hell during his life. Competing for the money are the Westies, the River Rats, Finn Cooley, and Maginty. The last of whom, a literal black Irishman, is particularly ruthless, kidnapping the Westies leader to send parts of him to his gang to scare them. Each gang was given part of a code, forcing them to cooperate to retrieve the money.

Finn Cooley, meanwhile, is being hunted down by MI6 assassin Yorkie Mitchell, who also wants to get his nephew, Peter, to allow his young partner, Andy Lorimer, to seek revenge for the death of his father. Since they can't get US Government sanctioning, they enlist the Punisher in their quest.

After battling each other through the Kitchen only to have the majority of their people wiped out or quit on them, the gang leaders agree to a truce and go for the money together. When they get to the where the money should be, they discover a final insult from Nesbitt wired to a bomb, killing them all, while the Punisher, Mitchell and Lorimer get away, allowing Lorimer to avenge his murdered father before leaving the US.

Retrieved from "https://marvel.fandom.com/wiki/Kitchen_Irish_(Story_Arc)?oldid=4281254"
Community content is available under CC-BY-SA unless otherwise noted.