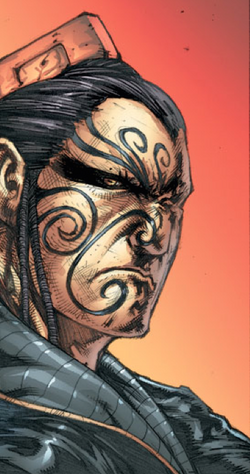 Kiwi Black was a Maori[1] mutant bred by Azazel to help him transport his army to Earth from the hellish dimension they had been trapped in.[2]

Soon after, he was one of the three not killed in the summoning ritual, and started secretly operating within Azazel's castle to free the X-Men. Kiwi rejected his father's influence, and allied himself with the X-Men in order to eliminate Azazel's army. In the process, he decapitated one of Azazel's minions Yidrazil and gained respect from his half-brother Nightcrawler.[3]

Kiwi Black lost his mutant powers after the M-Day.[4]

None, Kiwi Black is a depowered mutant.

Kiwi black wields a Maori Patu club which he uses to decapitate Yidrazil.[3]

Like this? Let us know!
Retrieved from "https://marvel.fandom.com/wiki/Kiwi_Black_(Earth-616)?oldid=6445200"
Community content is available under CC-BY-SA unless otherwise noted.