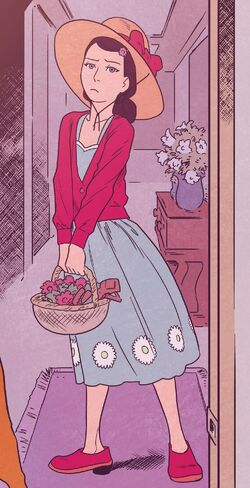 I have always just...I thought that was how plants grew. Because you asked them to. On our farm in Bern, I would speak and the crops would listen, but the roses...The roses would speak back.

Klara Prast was a Swiss immigrant, child-bride, and "wonder" from the early 1900s brought to the present-day by the Runaways.

Klara Prast was born in Bern, Switzerland where she was raised by a devoutly religious mother on a farm. When Klara first started speaking to plants, she assumed it was something everyone did. However, her mother was convinced Klara's power was witchcraft and arranged for her to be married to the much older, Mr. Prast, who was departing for America.[5]

In New York City, Prast forced Klara to work and suppress her powers. He regularly drank heavily, and was physically, verbally, and sexually abusive to Klara.[6]

Klara was working in a sweatshop when a fire broke out. Luckily, the Runaways, who had accidentally traveled back in time, were there to rescue the workers from the fire. Klara was able to escape using her botanopathy, but not before being spotted by Karolina Dean.[7]

Karolina saw Klara again later by accident while she was being threatened by her husband. The next day Karolina and Molly purposely found Klara, and Molly offered her a spot on the team. However, when Klara saw Karolina and Xavin kissing, she became frightened and ran away.[5] Klara later decided to depart with the Runaways after another beating from Prast.[8]

After traveling to the present, the Runaways decided to remain in New York for a few days to allow Klara to acclimate to the future and say goodbye to the city. Unfortunately, this was during the beginning of the Skrulls invasion of Earth.[9] Xavin and the other Runaways were caught in the fighting alongside the Young Avengers, but Speed was able to carry Molly and Klara to safety at Mount Rushmore.[10]

When the Runaways finally returned to California, the group took up residence in one of the Pride's safehouses, the Malibu House. Unfortunately, they were soon attacked by the Light Brigade.[11] The Light Brigade were survivors of the destruction of Majesdane, Karolina's parents' homeworld, and they blamed Karolina for the destruction and demanded that she return with them to face trial for her actions.[12] In a bid to get rid of them, Nico cast the spell "Scatter", which sent the four members of the Light Brigade to different corners of the Earth. However, she'd misjudged the spell's strength, and thus the Runaways themselves were also affected, becoming possessed with an inexplicable urge to split up and pursue largely useless actions. During this time, Molly convinced Klara to follow her up to a hill in order to build a fort.[1] Ultimately, the spell was reversed, but not before the Light Brigade managed to regroup. In order to keep the Light Brigade away, Xavin posed as Karolina and turned herself over to the Light Brigade.[13]

Sometime later, Molly came down with a sudden illness. Nico, believing that Klara had infected Molly with some illness that she'd unwittingly brought from the early 20th century, ordered her and Molly and Victor to be quarantined, during which Molly grew delirious and began smashing things. After Chase, who'd been absent during Molly's illness, began showing signs of being ill, Nico realized that the mysterious illnesses were the result of a spell that she'd accidentally cast, and thus she was able to reverse the effects.[14]

While living in Malibu, Klara adjusted to life in the 21st century becoming very talented with video games[15] and very interested in TV.[16] One night while watching TV with Old Lace a drone plane crashed into the Malibu House. Old Lace seemingly died while protecting Klara. In shock, Klara encased the entire house in vines.[17] The house was later destroyed, but the Runaways were able to escape.[18]

After Nico departed the Runaways, the team was camping out in Molly's old house. However, the F.B.I. tracked them down and reunited Molly with her grandmother and placed Klara in foster care.[2] Klara was eventually placed into foster care with Josh and Paul, a gay couple that planned to fully adopt her.[3]

Klara was approached by the newly reformed Runaways but outright rejected an offer to rejoin the team. Klara hated constantly running and hiding from authorities and found her civilian (non-superhuman) life more pleasant allowing her to adjust to modern life and plant roots. Her decision to not rejoin the Runaways was especially hard on Molly, who had viewed Klara as a sister.[3]

Klara is a "wonder", an early 20th century term for a super-humanly powered individual. Genetically Klara is a mutant[4] and has demonstrated the following abilities:

Like this? Let us know!
Retrieved from "https://marvel.fandom.com/wiki/Klara_Prast_(Earth-616)?oldid=5761036"
Community content is available under CC-BY-SA unless otherwise noted.