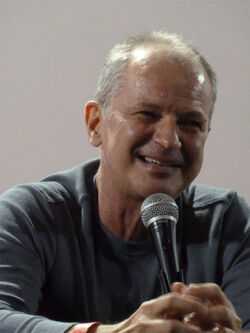 He first became known as the inker of Sal Buscema's pencils on Defenders. Klaus Janson is most noted for his work on Daredevil in the early 1980s. He began as inker for Frank Miller, eventually getting a shared pencils credit with #181. He then he became penciller for Daredevil 185-190, 192-196, with a partial credit for 197 (Aug 1983). He also drew numerous Daredevil covers.

Like this? Let us know!
Retrieved from "https://marvel.fandom.com/wiki/Klaus_Janson?oldid=4679001"
Community content is available under CC-BY-SA unless otherwise noted.