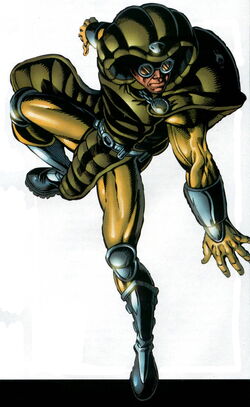 I've been bitten by a radioactive cobra??!!

Klaus Voorhees was an ex-convict working with the humanitarian medical researcher Professor Ezekiel Shecktor in India on a universal antitoxin for snake venom. Jealous of Shecktor's success, Voorhees plotted to kill him and make the murder look like an accident. Hence, Voorhees induced one of the cobras kept in the laboratory to bite both Shecktor and himself. Voorhees planned to use the universal antitoxin to save himself from death. Unknown to Voorhees, the cobra had been irradiated. The combination of the radioactive venom in his bloodstream and the experimental anti-toxin which he used created a mutagenic catalyst which gave Voorhees certain cobra-like powers.[1]

Assuming the costumed guise of the Cobra, Voorhees used his new found superhuman abilities for crime. Cobra travelled back to the United States, initially defeating Thor in their first encounter but Thor escaped after returning to Don Blake. The Cobra then went to the offices of Dr. Bruce Andrews and kidnapped Jane Foster climbing out of the window. Assuming he defeated Thor he let his guard down which allowed Thor to strike, Cobra dropped Jane and escaped as Thor saved her life.[1]

Teaming Up with Mr. Hyde

Cobra began his long time partnership with another of Thor's adversaries, Mister Hyde. But the team of the Cobra and Mister Hyde were defeated repeatedly, first by Thor[3][4][5] and later by the costumed crime fighter Daredevil. Hyde and Cobra were among the many costumed menaces assembled by Doctor Doom to disrupt the wedding of Reed Richards and Susan Storm.[6]

Hyde and the Cobra next battled Daredevil.[7] He then teamed with the original Jester and Mr. Hyde against Daredevil.[8]

He was next employed by the Purple Man, and battled Daredevil in an arena alongside Mr. Hyde, the Jester, and the Gladiator.[10]

Cobra served as a lead of the Serpent Squad with the Eel and the first Viper (Jordan Dixon). With the Serpent Squad, he attacked Captain America and the Falcon.[11] He subsequently joined the second Serpent Squad led by Viper (Madame Hydra) after Jordan Dixon's death. They battled Steve Rogers in his Nomad identity, and then became involved in an attempt to raise the continent of Lemuria.[12] He became trapped with the second Viper, and his cowardice earned her enmity.[13]

The Cobra came to believe that his criminal career would fare more successfully if he no longer acted in partnership with Hyde. Hence, when the Cobra made an escape from prison on Ryker's Island in New York, he refused to free Hyde, who was also imprisoned there, despite Hyde's pleas. Infuriated, Hyde vowed vengeance and has since made attempts on the Cobra's life.[14]

After operating independently for a time, Voorhees accepted an invitation to join the Serpent Society formed by Sidewinder.[15] When Sidewinder retired, Voorhees changed his codename to King Cobra and became the leader of the criminal organization.[16]

Hyde briefly helped the symbiote-bonded Toxin track Cobra after a prison escape by providing a piece of skin for the symbiote to track.[17]

King Cobra was recruited by Lucia von Bardas to attack Nick Fury and a group of heroes who were involved in a Secret War in Latveria a year earlier. The hired mercenaries were each a component of a bomb designed to destroy the city. Fury and his team were able to stop them and arrested them all including Cobra.[18]

After passing of the Superhuman Registration Act Cobra was forced to join the Thunderbolts and trained by Swordsman (Andreas Strucker), along with the Unicorn and the Enforcer Ox.[19] However they later rebelled and Cobra along with Mauler, Firebrand and Mr. Hyde attacked Yellowjacket, Constrictor, and other Initiative staff and trainees at Camp Hammond.[20]

Cobra and the Serpent Society are one of the many villains the X-Men took down while protecting San Francisco. They were robbing a bank until they were defeated by Hope Summers.[21]

Upon becoming King Cobra, Klaus passed the Cobra identity on to his nephew Piet Voorhees, administering the same mutagenic compound that gave him his powers.[22]

King Cobra has developed a number of special weapons to enhance his cobra-like powers. His costume is specially treated with a silicon and graphite-dust compound, making it extremely slippery. He has also designed special chemical suction devices for his fingers and feel, enabling him to stick to walls and ceilings. In the compartment behind his articulated chest armor is a fifty-foot long coil of steel cable that can be shot by means of a powerful spring.

From his spring-loaded device the Cobra can shoot a number of deadly projectiles. His "cobra-bite" missiles contain cobra venom. The venom from a single such missile can kill average-size, normal human being in six minutes. It takes more than one venom-filled missile to have the same effect on a superhumanly strong human being. The Cobra has also used projectiles carrying smoke, nerve gas, and a special substance that induces temporary blindness.

Like this? Let us know!
Retrieved from "https://marvel.fandom.com/wiki/Klaus_Voorhees_(Earth-616)?oldid=6181620"
Community content is available under CC-BY-SA unless otherwise noted.