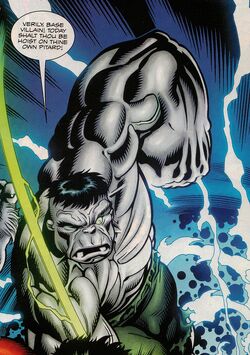 The Kluh is an intelligent incarnation of the Gray Hulk, a "superior" clone created by Xemnu in a failed attempt to destroy the Hulk and replace his very absence with Kluh. Kluh and Xemnu also had to fight Red Hulk up to the point where Impossible Man, who was watching the fight, used his magic to merge both Hulks into the Compound Hulk. Kluh was apparently killed by the Compound Hulk when this plan fell apart.[1]

As he is an intelligent incarnation of the Hulk, Kluh is generally smarter than the Hulk.[citation needed]

Less durable than the Hulk.[citation needed]

Like this? Let us know!
Retrieved from "https://marvel.fandom.com/wiki/Kluh_(Earth-616)?oldid=5630312"
Community content is available under CC-BY-SA unless otherwise noted.