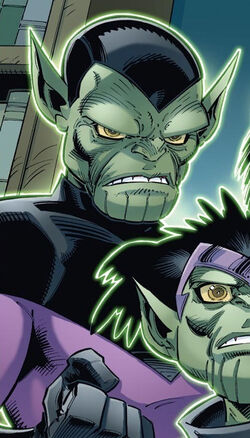 Kly'bn is a skrull soldier in Commander Lyja's unit, who was sent to Earth by Warpriest Kh'oja to replace the four members of Power Pack, who had been arrested and taken to Patchworld for crimes Kh'oja framed them for. He took the identity of Alex Power.[1]

Along with his fellow Skrulls, Kly'bn had been tasked to infiltrate S.W.O.R.D. in order to steal technology that could help the Skrulls get rid of the blockade the Synode had place on their planet, as well as gain access to Earth's securest planetary defenses. To do so, they convinced Dr. James Power, who worked at S.W.O.R.D., to take them with him during "take your kids to work day".[2]

He and his unit were eventually betrayed by Paibok, who wanted to stay on Earth forever. He was placed under Paibok's control with inhibitor collars, and thus forced to accompany Paibok to the Puzzle Planet to eliminate the real Power Pack. There, the four Skrulls were ambushed by the bounty hunters Abercombie and Finch, who had been tasked with recapturing Power Pack. Thinking the skrulls were the real Power Pack, the bounty hunters captured them and took them back to the reform planet. It's unknown what became of the four afterwards.[3]

Seemingly those of a Skrull & Alexander Power (Earth-616)#Abilities

Like this? Let us know!
Retrieved from "https://marvel.fandom.com/wiki/Kly%27bn_(Earth-5631)?oldid=5381260"
Community content is available under CC-BY-SA unless otherwise noted.