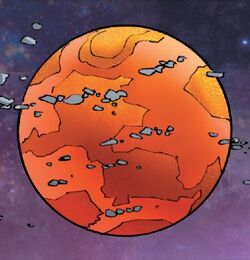 Klyntar[3] (the symbiote word for "cage"), also known informally as the Planet of the Symbiotes, is an artificial planet,[1] located in an uncharted sector of space not on any known maps;[4] though Thanos managed to obtain its coordinates and provided them to Wraith.[5]

At some point following his establishment of the Symbiote Hive billions of years in the past, the dark elder god Knull constructed an artificial planet from the living abyss to serve as the throneworld for his empire. From this base of operations, he waged war against the light brought into the universe by the Celestials - snuffing out stars, killing or enslaving gods by bonding them to symbiotes, and devouring entire civilizations.[6][1]

When the symbiotes were freed from Knull's control, they rebelled against their creator, seizing Knull and dragging him to the core of the Symbiote Throneworld, which served as his prison. Renaming the Symbiote Throneworld and themselves "Klyntar," after their word for "cage,"[1] the benevolent symbiotes established the Agents of the Cosmos, an organization comprised of various species of aliens bonded to benevolent symbiotes, revering the "Voice of the Cosmos," and dedicated to maintaining order across the universe.[4]

While serving as a herald of Galactus, the Silver Surfer came across Klyntar and was devoured by it, its constituent symbiotes attempting to imprison him alongside Knull at the artificial planet's core.[7]

Over time, Klyntar accumulated a rocky crust and atmosphere, disguising its true nature and furthering its ability to masquerade as a planet by developing a varied ecosystem comprised of symbiote-based flora and fauna.[3][8][9][10][11] At the beginning of the Kree-Skrull War, the Kree Empire discovered Klyntar and began harvesting symbiotes to use in a super-soldier program, with the only known success being Tel-Kar.[10] At some point, an alien poacher named Haze Mancer discovered Klyntar and began raiding it to abduct and weaponize symbiotes as well.[8]

The Guardians of the Galaxy were taken to Klyntar by the Venom symbiote, which had been reconnected to the hive mind and was being guided there so that it could be cleansed of its corruption.[4]

Klyntar was eventually raided by the Poisons with help from Haze Mancer, resulting in the destruction of the Agents of the Cosmos and the abduction of the symbiotes, leaving the planet seemingly barren and uninhabited;[12] however, the time-displaced X-Men eventually returned the remaining Klyntar to their planet.[9]

When Knull began slowly reawakening as a result of Carnage's efforts on Earth, the symbiotes of Klyntar began succumbing to his control once more -- attacking Sleeper and attempting to forcibly assimilate it into the hive-mind.[11] When Knull fully awakened, he destroyed Klyntar and seized control of its constituent symbiotes, coalescing them into a horde of Symbiote Dragons.[13]

In Earth-17628, Klyntar was a planet inhabited by a sentient space-faring species. By chance, an interstellar explorer stumbled across an asteroid where the dark god Knull had forsaken his creations - the symbiotes known as All-Black, Scream, Mania, and Raze - and brought them back to her homeworld. All-Black bonded to the explorer and the other three symbiotes also took female hosts, becoming known as the "Four Sisters". The four symbiotes reproduced until almost every inhabitant had been bonded to a symbiote, and for a time were happy to live in peace. When a hermit began preaching that the symbiotes were corrupting his people's culture, All-Black attacked him and was killed. Enraged, the remaining three sisters decided it was impossible for their kind to live in peace and went on a rampage, slaughtering or corrupting the peaceful Klyntar. Conquering the planet, they renamed it "Klyntar" after themselves and gave rise to a spacefaring empire.[14] Eventually, Thanos abducted a number of symbiotes for his experiments and vaporized Klyntar.[15]

Like this? Let us know!
Retrieved from "https://marvel.fandom.com/wiki/Klyntar_(Location)?oldid=6398304"
Community content is available under CC-BY-SA unless otherwise noted.