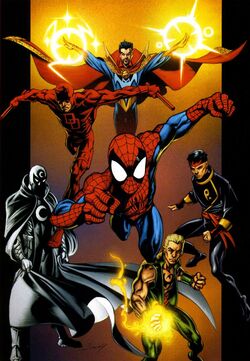 Someone known as Shang-Chi pretended to be interested in a job as the bodyguard/assassin of Wilson Fisk, the "Kingpin of Crime". He failed and narrowly escaped from his "interview" for the job. But just as he got to a safe location, he was confronted by one of the Kingpin's greatest enemies, Daredevil. After being rescued by Daredevil, Shang-Chi was then informed by him of a team he was putting together for a strike on the Kingpin, in which Shang-Chi was recruited by Daredevil to help bring down the Kingpin for good.

After Shang-Chi, Daredevil as Matt Murdock, met Peter Parker at Midtown High School and asked him to join the group, with the plan of killing the Kingpin, but Daredevil was turned down. In case Spider-Man changed his mind though, Murdock told him to go to the rooftop across from the street from St. Patrick's Cathedral at eight o'clock that night.[1]

After the group meet on their intended location, Daredevil revealed his plan on overthrowing the Kingpin, even if it meant killing the mob boss. However, Spider-Man objected to the idea of killing the Kingpin, and the group revised their plan and agreed to let Moon Knight, under the persona of Ronin, to join the Kingpin's employ. He would get close enough to find all of the incriminating evidence on him, and then the Knights would turn the information over to the authorities.

However, after the first meeting of the Ultimate Knights, Iron Fist arranged an audience with the Kingpin, telling him the entire story about the Knights and their plans. The Kingpin replied, "If this is true... then you have certainly earned my friendship".

Under the Kingpin's employ as a bodyguard, Ronin was order to forcibly bring Spider-Man to the Kingpin as a captive. After revealing that he knew that Ronin was Moon Knight, Kingpin had him beaten nearly to death, and let Spider-Man leave with the knowledge that one of the Knights was a traitor. When Spider-Man arrived, everyone was already there discussing what will be done.

Moon Knight was taken to an abandoned riverside by two of the Kingpin's henchmen and they executed him with a bullet shot to his head. After they disposed his body in the river, Moon Knight emerged alive and well.

On the same meeting on the rooftop, Spider-Man aggressively attacked Daredevil accusing him for working for the Kingpin. But after a bomb (planted by the Kingpin's men) destroyed the law offices of Matt Murdock, Iron Fist was revealed as the traitor, though only because Kingpin threatened his daughter's life. Iron Fist was sent back to Kingpin to distract him while Daredevil tried to kill his comatose wife. After a standoff between Daredevil, Kingpin, and Spider-Man, Kingpin agreed to leave the country in exchange for his wife's safety, but he secretly and furiously plotted to have Daredevil killed, Dr. Strange's hands broken, and Spider-Man's school blown up. Meanwhile, Moon Knight went to the police, revealed his secret identity, and said that the Kingpin tried to kill him, which gave the police enough incriminating evidence to arrest the Kingpin on attempted murder charges.

After the arrest of the Kingpin, the Knights quietly went their separate ways: Shang-Chi caught a train out of town, Iron Fist returned to his daughter, Dr. Strange went back to his sanctum, Daredevil berated himself at a church, and Peter Parker sadly walked by a store bearing Spider-Man products.[2]

Retrieved from "https://marvel.fandom.com/wiki/Knights_(Earth-1610)?oldid=5548290"
Community content is available under CC-BY-SA unless otherwise noted.