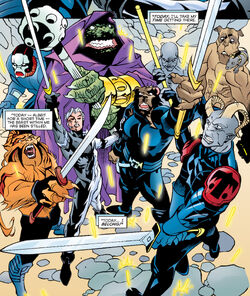 Base of Operations
Wundagore Mountain
Affiliations

Origin
Created and organized by the High Evolutionary to oppose Chthon should he ever return.

When scientist Herbert Wyndham was approached by a mysterious benefactor in the early 20th century, he was given the resources and knowledge to construct a massive research lab on Wundagore Mountain in the Eastern European country of Transia to conduct his experiments on evolution and genetics.[1] From his work, he created the New Men, humanoid creatures evolved from normal animals and given human-level intelligence.[2]

Soon afterward, the Evolutionary is approached by the spirit of a sixth-century sorcerer Magnus inhabiting the body of his assistant, Jonathan Drew, who warns him of the coming of Chthon, and ancient evil sealed beneath the mountain.[3] In order to repel him, Magnus offers to train the New Men in the art of combat and chivalry like the heroes of his day, The Knights of the Round Table. The Knights of Wundagore are formed, and Chthon, attacking through a host body called The Other, is defeated.[3]

The High Evolutionary, converting his citadel into a spaceship, left earth along with his Knights. After creating his own version of Earth known as Counter-Earth, The Evolutionary and his Knights are attacked by Man-Beast, who followed them to the new world with his own New Men.[5] With the help of Adam Warlock, the Man-Beast is defeated and partially devolved.[6]

The High Evolutionary later migrated his New Men to a planet in the Sirius solar system he called Wundagore II. Giving in to their animalistic nature, all New Men, including the Knights, eventually became savage and warlike. With their society threatened, the Evolutionary evolved himself into possessing god-like psionic powers and devolved his own creations, including the Knights, back into normal animals.

Some time later, this world would be discovered by Commander Arcturus of the Rigellian colonizers who was seeking a new homeworld to use as a staging ground to wage war against his people's leader, the Grand Commissioner. When one of Arcturus' irradiated probes lands on Wundagore II, it creates a mutagenic effect which evolves all the New Men back to their humanoid forms. Arcturus' fleet attacks the planet, but are ultimately repelled by a collaboration of the Knights, Iron Man, the Jack of Hearts, and the Soviet Super-Soldiers. The New Men re-formed their society and, now led by the Knight Sir Lyan, continued to live in peace.

Returning to Earth, the High Evolutionary must fight to reclaim his former home of Wundagore Mountain from the Acolytes, who see the site as holy ground since it was the last known location of Magneto's wife, Magda.[7] To prevent further attacks, he creates a new team of Knights to watch over his citadel, who eventually do battle with the Acolytes and Genoshan Mutates during their attempt to re-take the mountain.[8] Forced to retreat, the Knights re-group at their New York base, The Haven, and the Evolutionary appoints Quicksilver as the new team leader while he recouperates in the Savage Land.[9]

When the Evolutionary's Savage Land base is attacked by mutants hired by Exodus, the Knights come to his aid, only to find out that one of their members, Lord Anon, is in fact the Man-Beast, having killed the original holder of the name, Sir Wulf.[10] The Knights later team up with the Heroes for Hire and are able to re-claim their home from the combined forces of Man-Beast and the Acolytes.[11] Quicksilver leaves the team shortly afterward.[12]

After the events of M-Day, where the majority of Earth's mutants lost their powers and the X-Gene was seemingly wiped from humanity, the X-Man Beast travels to Wundagore Mountain to meet with the Evolutionary to find a way to reverse it. There, he meets with a new group of Knights led by Snow Queen, who attack him before his audience.[13]

In an attempt to summon the Elder God Chthon back into the world, the dark magician Modred seized control of the Dark Hold cavern underneath Wundagore Mountain, killing every Knight present, except for Bova, before being defeated by the Mighty Avengers.[14] It is unknown which Knights specifically were slain during the attack.

Equipment: Advanced armor.
Transportation: "Atomic Steeds": which the High Evolutionary constructed them with help from the ghost of a 6th century magician named Magus.
Weapons: Advanced weaponry, ranging from swords to energy weapons.

Retrieved from "https://marvel.fandom.com/wiki/Knights_of_Wundagore_(Earth-616)?oldid=5548305"
Community content is available under CC-BY-SA unless otherwise noted.