Knights of the Atomic Round Table 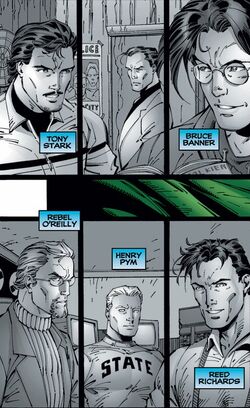 When the Fantastic Four and the Avengers sacrificed their lives to destroy Onslaught, Franklin Richards, the son of the FF's Mr. Fantastic and Invisible Woman subconsciously created a pocket universe to save their lives. There they spent an entire year reliving living their new lives "reborn" into a reality where they recently gained their abilities that vaguely mirror how they gained their powers originally.

In this pocket-dimension history would unfold in a way that the greatest minds of those who sacrificed themselves in the Onslaught event would attend the same school and have a close relationship prior to being "reborn" as that worlds greatest heroes. These men would include Reed Richards, Tony Stark, Henry Pym, Bruce Banner and Victor von Doom. Rounding the group would be Conner "Rebel" O'Reilly, a being unique to Counter-Earth, who was friends with Tony Stark.

The group would work together on a group project to develop an exo-suit, a piece of personal armor. However, none could come to an agreement on how the armor should be used. Stark would wish to profit off the armor, while Richards wished to use it for the betterment of mankind, while Doom wanted to use the technology to take over his home country of Latveria. Ultimately the group fell apart, each member going on to their own independent areas of expertise. Stark and O'Reilly would continue to work on a suit of personalized armor, developing what would eventually become the Prometheum Armor. Doom would mock them when news would come out that the Russian government had developed their own suit of personal armor.

Doom himself would continue on with his own experimental armor, and one day while attempting to activate it on his own he'd be interrupted by Reed Richards. Doom would ask Richards to assist in his glory, however Richards would refuse, and then point out an error in his calculations. Scoffing at this notion, Doom would attempt to activate the armor, causing an explosion that would horribly scar his entire body. For his reckless actions Doom was expelled from State University.

The group would drift apart and in modern times they would all become important members of the newly formed super-hero community:

Each member would cross paths many times during their heroic careers, however they would officially (minus the then deceased O'Reilly) reunite to work together in building the Ultimate Nullifier weapon to combat the threat of Galactus when he had come to devour the Earth.

Following the defeat of Galactus, all the members of the Atomic Knights would ultimately return to their native reality of Earth-616 to resume their super-heroic activities there. Doom for a time would briefly control Counter-Earth before abandoning it. Rebel would be resurrected once more and has been active as a resistance fighter against Master Man and later an enforcer for Doom during the time that he ruled Counter-Earth.

Like this? Let us know!
Retrieved from "https://marvel.fandom.com/wiki/Knights_of_the_Atomic_Round_Table_(Earth-616)?oldid=5548300"
Community content is available under CC-BY-SA unless otherwise noted.