Knights of the Infinite 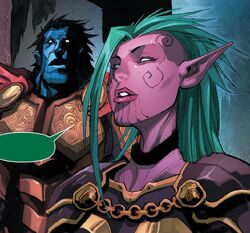 The Knights of the Infinite were a group of Skrull/Kree hybrids gathered together over time by the very first of their kind, Dorrek Supreme. The objective of Dorrek was to shape this group of outcasts into heroes dedicated to uniting the two warring empires. As time passed, the Knights started believing in the prophecy that once the Skrull and the Kree empires fell, the Knights were destined to unify and protect the two empires, under the leadership of he who managed to take up Dorrek Supreme's sword, Excelsior, a feat that would prove him as the reincarnation of Dorrek Supreme.[1] The Knights eyed the first royal hybrid in thousands of years, Dorrek VIII, known to Earthers as the super hero Hulkling.[2]

Following the destruction of the Kree capital planet Hala, the Knights were anxious to recruit Dorrek VIII to become their king. However, the elder M'ryn the Magus, who had created the prophecy, tried to postpone its fulfillment, because another part of the prophecy he maintained secret from the Knights involved his death. The Knights decided to part anyways, and they travelled to Earth and kidnapped Hulkling, and his boyfriend Wiccan by accident. The Knights returned to their base of operations, the Forbidden Asteroids, apologized for the kidnapping, and showed Hulkling the test he had to pass in order to see if he was truly the chosen one: pulling Excelsior from a stone. Hulkling passed the test, and the Knights kneeled before him.[2]

When the Knights returned to their home, Castle Tarnala, they discovered the corpse of M'ryn possessed by the evil wizard Moridun. Any attempts at damaging Moridun were in vain, and the creature soon absorbed enough power to grow in size, destroying the castle from the inside out. Hulkling and Wiccan's teammates, the New Avengers, joined the brawl against Moridun, to no avail. After accidentally absorbing an energy blast from Moridun with Excelsior, he realized he could use it against Moridun. The New Avengers distracted Moridun long enough to allow Hulkling to stab him in the face, seemingly killing the creature.

Once the dust settled, the Knights buried those lost to Moridun and allowed Hulkling to leave, explaining that the young hero had a duty to his friends, and he wouldn't be their king if he was capable of abandoning that. Before biding farewell, Lan-Zarr promised that when the time was right, the Knights of the Infinite would fight at his side.[1]

The Knights of The Infinite utilize a blend of Kree and Skrull technologies which is operated by either a blend of science magic or some form of low level reality warping.

Knight Ship: The knights possess a half-a-mile wide space vessel capable of masking its presence and entering planetary orbit without detection, has faster than light transport.

Retrieved from "https://marvel.fandom.com/wiki/Knights_of_the_Infinite_(Earth-616)?oldid=5706034"
Community content is available under CC-BY-SA unless otherwise noted.