Knights of the Round Table 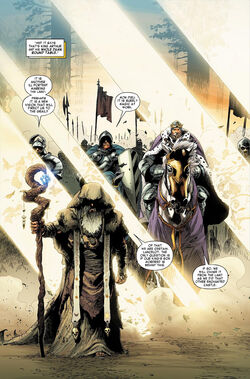 The Knights of the Round Table are the legendary knights of King Arthur who ruled England circa the 6th Century. They were the primary defenders of Camelot during the period. They were defenders of the realm until the fall of Camelot. The Knights have spawned many legends and stories throughout England and Europe and as such there are many accounts. The purposes of this article is to chronicle the activities of the Knights of the Earth-616 universe.

Years prior to the fall of Camelot, the Knights and their King were unaware that Arthur's relative Mordred and his consort Morgan Le Fay plotted to take over the kingdom. However the royal wizard Merlyn divined this treachery and called upon Sir Percy of Scandia, Mordred's nephew, to come to Camelot and act as his champion the Black Knight. In order to maintain a secret identity, Percy acted as a clumsy pacifist, whom the Knights thought very little of. Not long after Sir Percy's arrival, King Arthur went missing prompting Lancelot, Galahad and Sir Gawain went out searching for the King unaware that Mordred has secretly locked Arthur in the dungeons below the castle. The searched fruitlessly until the Black Knight rescued Arthur from the dungeon, but could not find evidence that implicated Mordred in the plot.[3]

Later when Mordred once again took control of the throne following the kidnapping of King Arthur at the hands of French-Sicilian pirates hired by Mordred, the Knights of the Round Table were sent off on false leads to locate the King. Eventually the Black Knight rescued King Arthur and returned him to Camelot where he retook the throne.[4]

Eventually Lancelot began an affair with Queen Guinevere, when this became common knowledge the realm was thrown into a civil war which was capitalized by Mordred who brought about Camelot's fall and the death of King Arthur, many of the knights were slain.[5][6]

Retrieved from "https://marvel.fandom.com/wiki/Knights_of_the_Round_Table_(Earth-616)?oldid=6080073"
Community content is available under CC-BY-SA unless otherwise noted.