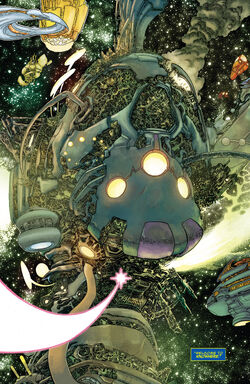 At the beginning of the universe, the dark god Knull created a symbiotic sword and used it to decapitate a Celestial. Banished into the Void, Knull used the severed head as a temporary base and a forge to refine his weapon into what would ultimately be known as All-Black.[2][3] The headless Celestial's decapitated body was trapped in the Realm Between, tethered to All-Black and by extension to Knull; absorbing the souls of those slain by the Necrosword until it manifested a world of the dead within itself.[4]

As the head eroded and decayed over the millennia, a city was built inside and it became known as Knowhere; serving as a scientific station for various races seeking to study events at the edge of the universe. Served by a council made up of representatives of each race and, for a time, by Cosmo, the station's head of security,[5] the station faced numerous alien invasions, most of which were fought off by Nova and the Guardians of the Galaxy, with the Luminals serving as sometime-annoyance to the Guardians, but often doing what they could to protect the station.[citation needed] It served as a base of operations for the Annihilators.[citation needed]

Knowhere was later taken over by Hela and the Black Order and used to attack the Sanctuary II when Eros gathered the major cosmic powers to show them the will of his dead brother Thanos.[6] They continued to use Knowhere as the location of Thanos's resurrection after they recovered Thanos' body.[7] During the process where Thanos transferred his consciousness from the mind of his brother Eros into his body, the Guardians of the Galaxy and the Dark Guardians invaded Knowhere to prevent this. At the end of the battle, Knowhere along with Hela and Thanos were sucked into an artificial black hole.[8]

Knowhere is the second celestial object orbiting Battleworld, considered to be its moon. Knowhere is the decapitated head of a Celestial, said to have been slain by God Emperor Doom to protect Battleworld, and it remained orbiting the planet as a reminder of Doom's power. It is not of common knowledge that Knowhere is inhabited, therefore, its inhabitants are forbidden of leaving its territory.

Gamora left Knowhere many times, resulting in Angela being sent to Knowhere to deal with her. But she was rescued alongside Drax, who picked up a fight with Angela when she appeared asking for Gamora, by her fellow Guardian, Rocket Raccoon. They took shelter in Mantis' apartment, but there they were attacked by Yotat the Destroyer,[9] who was confronted by Drax months ago after he took revenge on Giogo, a mob boss who tried to kill him a year earlier. After defeating the Guardians, Yotat claimed Knowhere as his.[10]

The moment before Drax was going to be executed by Yotat, Angela arrived and saved him by striking the villain with a lightning bolt. Her intervention allowed Drax to recover and beat Yotat, weakening him enough a second attack from Angela finally defeated him. The Nova Corps appeared on the scene to take Yotat into custody, as they had previously failed to subdue him during his first encounter with Drax. After Yotat was handed over the Nova Corps, Angela resumed her business with Gamora. Angela demanded Gamora an explanation for heresy, as she did not see Doom as a supreme ruler. Gamora's failure to properly explain the reason behind her belief to Angela resulted in a confrontation, which was interrupted by the arrival of a mysterious woman through a portal.[11]

At first astonished by the woman's appearance, Angela and Gamora tried to communicate with her, but they didn't recognize her language. Despite Gamora saying to Angela to disarm herself in order to calm the warrior down, Angela didn't listen and they were attacked and defeated by her. The Nova Corps showed up soon afterwards and tried to take her down, but she overcame them, killing many of them in the process before recognizing the Kree symbol on Captain Marvel's chest. With the mysterious warrior distracted, Angela and Gamora back-stabbed her with their swords, seemingly killing her. Later, Angela tried to convince Gamora to stay in Knowhere and obey the laws created by Doom, but Gamora couldn't do it. As Gamora tried to explain her reasons to trespass to other domains, the believed dead mysterious woman back-stabbed Angela and killed her. Furious, Gamora attacked her and was almost killed, but was saved by her teammates. Together, the Guardians managed to finally defeat the warrior.

While Gamora grieved Angela's death and tried to remember what was lost, Peter Quill appeared to enlist the Guardians to take God Emperor Doom down.[12]

Knowhere is the severed head of an ancient Celestial in free orbit, and served as a mining colony and trading outpost on the very outskirts of known space. Hundreds of years ago, the Tivan Group began sending workers in to mine the rare organic materials: bone, brain tissue, spinal fluid, etc. The mining continues to this day and due to its illegal and dangerous nature, Knowhere attracts criminals, outlaws, and rogues from across the galaxy. It is a lawless and unruly locale. Knowhere is also was home to The Collector's museum.[1]

Following Malekith's defeat, Sif and Volstagg delivered the Aether to the Collector for safekeeping. As they left, the Collector remarked that he only had five more stones left to obtain. [13]

After escaping from the Kyln, the Guardians of the Galaxy arrived at Knowhere with the intention of selling the Orb to the Collector. After he explains that the Orb is a containment device for an object of immense power, his assistant Carina attempted to free herself from his servitude by using the power of the orb but she and the Collectors museum were destroyed, releasing a dog and a talking duck in the process.[1]

Meanwhile Drax, obsessed with avenging the deaths of his wife and daughter, alerted Ronan to their presence. Ronan's forces attacked Knowhere while he and Drax faced each other in hand-to-hand combat. After overpowering Drax, Ronan took possession of the Orb.[1]

Like this? Let us know!
Retrieved from "https://marvel.fandom.com/wiki/Knowhere?oldid=6449615"
Community content is available under CC-BY-SA unless otherwise noted.