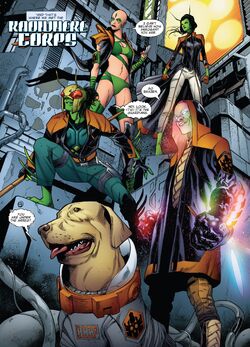 The Knowhere Corps was a team of vigilantes dedicated to maintaining the peace and law in Knowhere. They apprehended Yotat the Destroyer after the Guardians of the Galaxy dealt with him.[1]

The team seemingly disbanded with the destruction of Knowhere,[2] which the Black Order stole in order to attack the reading of the last will and testament of Thanos.[3] Some of its members were later captured and brainwashed by the Universal Church of Truth.[4][5]

Retrieved from "https://marvel.fandom.com/wiki/Knowhere_Corps_(Earth-616)?oldid=5733861"
Community content is available under CC-BY-SA unless otherwise noted.