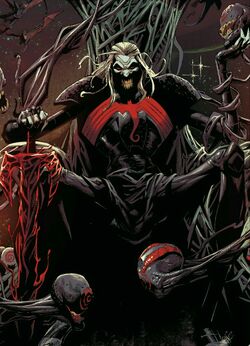 At some point following his creation of All-Black, the primordial dark god Knull manifested a suit of symbiote-armor from the living abyss.[2] Knull wore the symbiote-armor throughout his reign as the god-king of the symbiotes and his war against the Light, with it aiding him in his battles against the Silver Surfer and entire armies of gods.[6][7][2] Knull used its constituent living abyss to manifest both the symbiote dragon later known as the Grendel and the first of the lesser symbiotes.[3][2]

After Knull's connection to the symbiote hive-mind was severed, his armor remained one of the few symbiotes subservient to him,[2] but was seemingly stripped from him by the rebelling symbiotes after they imprisoned him in the core of the symbiote throneworld.[8][6] Knull's avatar manifested from the Grendel symbiote-dragon wore a facsimile of the armor,[9] attempting to assimilate the Tyrannosaurus and Venom symbiotes into it.[8] When Knull broke free from his prison, he immediately reformed his symbiote-armor in preparation for resuming his conquest of the cosmos, assimilated Wraith's Exolon into it, and used its living abyss to manifest a Necrosword.[10][11]

At some point prior to arriving on Earth, Knull changed his symbiote-armor's appearance - sporting a sleeker cuirass with straight-tailed dragon emblems, and spikes on its pauldrons; and after arriving on Earth forcibly absorbed the Venom symbiote into his armor and manifested it as a serrated blade on Knull's right arm.[1][5] During his battle with Thor Odinson, Knull manifested a Necrosword from his symbiote-armor and used it to impale Thor.[12]

When confronting the Silver Surfer in preparation for resuming their ancient duel, Knull transformed his symbiote-armor into a more combat-oriented form. However, Eddie -- who had been transformed into Captain Universe -- interceded and ultimately ripped Knull's armor off in retribution for Knull having torn off the Venom symbiote.[13]

Primordial Symbiote Physiology: Knull's armor seemingly possesses powers similar to those of the All-Black symbiote when it is used as armor.[14][6] It is capable of altering its appearance into more combat-oriented forms,[15][7] extending its arm-wraps into tendrils, and can also manifest symbiotes, symbiote dragons, and Necroswords from its constituent living abyss.[2][3][12]

Unlike other symbiotes, Knull's symbiote-armor is not particularly vulnerable to heat -- it was capable of withstanding being plunged through the atmosphere of Gorr's Homeworld (albeit with minor damage),[16][2] and survived being immersed in a star by the Silver Surfer.[7]

Like this? Let us know!
Retrieved from "https://marvel.fandom.com/wiki/Knull%27s_Symbiote_(Earth-616)?oldid=6453501"
Community content is available under CC-BY-SA unless otherwise noted.