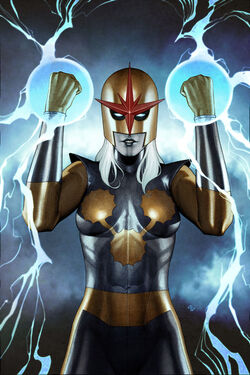 A captain in the Kree military, Ko-Rel fought against the Annihilation Wave alongside her crew until their cruiser was shot down and crashed on the planet Drez-Lar. She lead the surviving members for a year, sending out a help message everyday, hoping for rescue.

Arriving in Kree space as the Phalanx sealed it off, Nova (Richard Rider) was forced into a retreat, hitting the barrier erected by the Phalanx at maximum velocity and falling onto the surface of Drez-Lar, nearly dead. He was quickly found by Ko-Rel on a routine patrol, causing the Xandarian Worldmind to imbue her with part of its power, so as to have an active representative to help Rider, who housed the Worldmind's essence.[2]

Taking the weakened Rider back to her ship after the Worldmind had insisted, she left him there to recover until the Phalanx, led by Gamora, attacked the ship, looking for him. Wanting to lead the Phalanx away from her crew, she fled the fight, taunting the Phalanx into following her. She then began battling them in the air above the ship, not aware of Gamora sneaking through the ship, killing members of her crew and eventually finding Rider, who she assimilated into the Phalanx.[1]

When she was finished fighting the Phalanx, Ko-Rel was shocked to find that she failed the people she promised to protect. The Worldmind that called her, asking her to kill Rider and himself before he succumbs to the transmode virus; the Phalanx empowered by the Nova Force would be unstoppable. She tracks down Rider and engages him. With Worldmind giving her tactical information, she was able to avoid the much more powerful Rider, before she incapacitates him. However, she refused to end his life, for her son's sake. However, her moment of hesitation caused her to let her guard down, as Gamora stabbed her in the back. As the life left her, Ko-Rel tried reminding Rider that this is not who is before. He last word was her son's name.[3]

Though dead, Ko-Rel proved to a great significance in Rider's freedom from the Phalanx. When she died, the remaining Nova Force that Worldmind imbued in her returned to Rider, giving him the strength to place the virus in remission. A last mental message from her was to ask Rider to save her son.[4]

Ko-Rel's personality and image has since been co-opted by the Worldmind as a template to enable it to communicate with the current Corps.

Kree Physiology: As member of the Kree, Ko-Rel possessed powers common of the Kree race, including superhuman strength and durability.

Standard powers of a Nova Corps Centurion with direct access to the Xandarian Worldmind for knowledge and strategy.

Like this? Let us know!
Retrieved from "https://marvel.fandom.com/wiki/Ko-Rel_(Earth-616)?oldid=6306977"
Community content is available under CC-BY-SA unless otherwise noted.