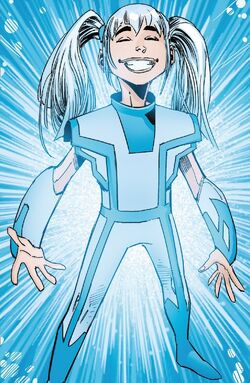 I'm sorry I got it wrong. I know what to do now. Thank you.

Kobik originated from the proposal of a S.H.I.E.L.D. project to use fragments of Cosmic Cubes to reshape reality as the agency would deem necessary.[1] The erratic behavior caused the pieces to violently merge together into a single being. The being that hatched from their union suffered from a damaged and splintered sense of consciousness, and decided to adopt the form it felt it most resembled in its confusion, a child.[2]

Following the death of the program's leader Dr. Karen Fowler, another expert in Cosmic Cubes named Erik Selvig was called in to help S.H.I.E.L.D. understand and control Kobik. Motivated by the desire of being truly loved, Kobik decided to go to one person who had held dear one of the Cosmic Cubes that now partially composed Kobik, the Red Skull. The Red Skull took advantage of the child's affinity and naivety and taught her the ways of Hydra. Kobik began to lead a double life, using her omnipresence to be in the company of both S.H.I.E.L.D. and the Red Skull at the same time, while keeping the latter a secret.

Kobik's innocently deranged set of values caused her to rewrite the past of Selvig's life, inserting a life-long loyalty to Hydra into it, believing that turning a person into a Hydra zealot was a positive thing. Red Skull's discovery of what Kobik had done to Selvig inspired him to put into motion a plan to turn his biggest enemy, Steve Rogers, to Hydra's ranks.

Under the command of the Red Skull, Erik Selvig proposed the creation of Pleasant Hill, a picture-perfect town inhabited by reformed super-villains, whose appearance and memories were tampered with using Kobik's power.[3] As a consequence of the Red Skull's manipulations, one of the villains, the Fixer, subconsciously created a device that returned him to his true self, and he then proceeded to use it on several other inmates, who, being led by Baron Zemo, unleashed a coordinated assault on the town to wreak havoc in revenge for having their lives tampered with.[4]

Scared by the sudden destruction being sown by the villains, Kobik ran away and took refuge in her favorite bowling alley. She was found by Steve Rogers, who at the time had been drained of the Super-Soldier Serum that gave him powers, in an attempt to get her to use her powers to end the villains' assault.[5] Selvig and the Red Skull, who was posing as one of the town's inhabitants, facilitated Rogers' encounter with Kobik, but for a different reason.[3] When he was trying to reason with Kobik, Steve was brutally attacked by Crossbones.[5] With Rogers on the brink of death, Kobik intervened, and attempted to restore him to his prime. Due to her unwittingly deranged values, Kobik also decided to turn Steve into a Hydra loyalist, creating a new version of history in which that was possible due to Steve undergoing Hydra brainwashing since he was a kid. Kobik subsequently replaced the real Steve with the twisted version of him she had created.[3]

When two Avengers teams, the Avengers and the Unity Division arrived to Pleasant Hill to help contain the situation, Kobik captured them and turned them into inhabitants of the town in an attempt to fix the commotion.[6] The heroes eventually broke free from Kobik's influence and returned to being their true selves.[7] However, the villains mercilessly attacked them after learning of their presence, heavily injuring and even killing some of them. Deadpool managed to reach out to Kobik and get her to empathize with him based on their shared past of being manipulated beyond their control. Kobik proceeded to do right by the heroes, reviving and healing them, returning them to their prime.[8]

After helping the heroes, Kobik disappeared once again. The villains set out to find her, for which Kraven the Hunter set up a bait to lure her with her childish personality in mind, using a picnic tea party.[9] After getting Kobik to trust him, Kraven had her walk into a containment device created by the Fixer, and brought her to the town hall, where Baron Zemo had set up the base of operations of his rebellion.

The Avengers took the fight to Zemo, and managed to stop him from stripping Kobik of her sentience to use her in the form of a regular Cosmic Cube, so he could rewrite reality as he pleased. Once she was freed from the device, Kobik showed her dissatisfaction with the events transpiring in the town due to Zemo's actions, and her disillusion with her experience among humans due to the way S.H.I.E.L.D. used her. She blasted away the Winter Soldier, who had tried to put her down for considering her too dangerous, and teleported both Baron Zemo and Erik Selvig away from Pleasant Hill before disappearing herself.

Kobik later appeared before the Winter Soldier, and set out to show him that she could do good. When Bucky agreed to take Kobik with him, she also asked him to bring some of the "friends" she had made in Pleasant Hill.[10] The "friends" become the latest version of the Thunderbolts.[11]

After several adventures,[12] Baron Zemo reassembled the Masters of Evil to make Winter Soldier pay for creating his own team named the Thunderbolts and to retrieve Kobik. Kobik was confronted by Zemo and shown a battered Winter Soldier to make her comply with his wishes. Instead, Kobik vanished with Winter Soldier.[13] To save Winter Soldier from being killed by Zemo, Kobik attempted to change his history to make him an agent of Hydra. However, Winter Soldier refused to serve Hydra, forcing Kobik to confront him. The two got into an argument over Kobik's disturbing views on Hydra. After being told off by Winter Soldier, Kobik lost it and threw a tantrum.[14] This caused her powers to go out of control, threatening to destroy all of reality. Fixer prevented this from happening by blasting Kobik with laser beams, but he also unintentionally destroyed Kobik's human form and reverted her back into Cosmic Cube shards.[15] Zemo had his minions gather up Kobik's shards so he could combine them into a Cosmic Cube. Erik Selvig was supposed to put Kobik back together, but this would have required him destroying Kobik's sentience, something Selvig refused to do as he saw Kobik as a daughter. After safeguarding the pieces away from Zemo, Selvig killed himself.[16]

Even though Kobik's physical form was shattered, Kobik's herself survived, and sheltered herself in her own mindscape, scared and remorseful after realizing what turning Captain America into Hydra really accomplished. Upon her stumbled the memory of the real Steve Rogers, who had been trapped inside Kobik's mindscape ever since she replaced him.[17]

Meanwhile in the real world, the fascist Captain America conquered the United States,[18] and used Hydra's resources to hunt down the fragments of Kobik that were scattered all over the world so they could be fused back together.[19] Hydra and Steve Rogers eventually gathered all but one of the fragments, with the final shard being in possession of the Underground, a contingent of American superheroes fighting against Hydra's regime.[17]

When the Underground confronted Captain America, he used the majority of the Cube he possessed to rewrite the world to Hydra's image. The heroes managed to trick Rogers into completing the Cube, allowing the Winter Soldier to reach into Kobik's mindscape, leading to her to bring back to the real world the original Steve Rogers. Kobik also returned, using her powers to return the world to normality. Following the defeat of the fascist Captain America at the hands of the real one, Kobik erased the rewritten version of history she had created that made the twisted version of Steve possible in the first place.[20]

Near-Omnipotence: Kobik was described as a being of near-absolute power. The way she uses her powers has been described as seeking what's pure and good in anything, and giving it life. Her abilities involved changing someone's appearance and reviving the dead.[2]

Omnipresence: Kobik was able to be in the company of both S.H.I.E.L.D. and the Red Skull at the same time.[3]

Kobik had the mentality of a child, making her susceptible to manipulation and trickery. She also had the misguided view that Hydra was good and would transform certain people into followers of Hydra, always against their will. Furthermore, if she became extremely emotional, her powers could go out of control and threaten everything and everyone around her and even reality itself.

Like this? Let us know!
Retrieved from "https://marvel.fandom.com/wiki/Kobik_(Earth-616)?oldid=6103499"
Community content is available under CC-BY-SA unless otherwise noted.