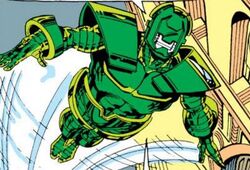 Kondrati Topolov (Russian: Кондрат Юрьевич Топалов) also known as Gremlin, was the son of the Gargoyle, a deformed, mutant genius who worked for the Soviet government until he captured the Hulk for study. After the encounter, the Hulk cured the Gargoyle, who later committed suicide - never knowing that he had an incoming child. The young Gremlin was tricked to believe that the Hulk had killed his father and, wanting revenge, the Gremlin worked for the Soviet government as a child genius, first fighting the Hulk in Canada. Albeit the Hulk escaped, the Gremlin captured and retained General Ross.[4]

He later worked with the Soviet Super-Soldiers and built his own version of the Titanium Man power armor.[5]

He was presumed killed when fighting Iron Man during the first Armor Wars when his titanium armor had caught fire and he plunged into a frozen-over lake.[6]

During the second Armor Wars, Tony briefly battled what he believed to be the Gremlin's ghost (in the form of his Titanium Man armor). The Titanium Man taunts him and vows revenge against him. Iron Man confesses to being responsible for Gremlin’s death. But at that moment, the truth behind the farce is revealed. It is not the ghost of the Gremlin/Titanium Man that Tony is facing, but rather it is the Living Laser.[7]

A handgun that fired high-explosive bullets. The internal weapon systems of Titanium Man, including plasma projectors in the hands and particle accelerator in the head.

Advanced Russian vehicles and flight under his own power.

Like this? Let us know!
Retrieved from "https://marvel.fandom.com/wiki/Kondrati_Topolov_(Earth-616)?oldid=5725594"
Community content is available under CC-BY-SA unless otherwise noted.