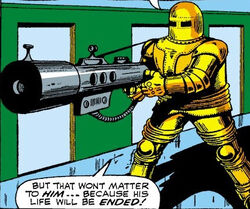 Dr. Konrad Zaxon was a scientist hired by the US Army to replace Bruce Banner who was suspected a traitor. Zaxon planned to harness the Hulk's energy with an Attractor, a machine of his invention, by which he wanted to declare himself Master of Mankind.[1]

He was killed when he was struck by his own weapon in a battle against the Hulk, as the Attractor worked too slowly and Hulk was able to overcome its effects and escape from the cell where he was imprisoned.[2]

Like this? Let us know!
Retrieved from "https://marvel.fandom.com/wiki/Konrad_Zaxon_(Earth-616)?oldid=5472117"
Community content is available under CC-BY-SA unless otherwise noted.