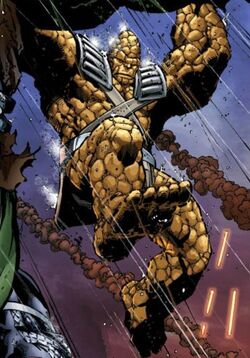 Korg of Krona, son of O-Korg and Ahna. Brother-killer of Margus.

Korg is a Kronan born on the planet Ria. He and his brother Margus were part of an invasion force sent to conquer the planet Earth.[7]

Korg was based on the planet Saturn, they were advanced scouts for a planned invasion of Earth. They landed in Norway and frightened a local life form. The human tried to warn his people, but they dismissed him. One human overheard and gone to look for himself. When he stepped on a twig, the aliens noticed him. He fled into the hills, where he lost his cane. However the human returned but now in the form of Thor, where he easily lifted the boulder and left the cave. He verified that the hammer had all the powers of Mjolnir, Thor's legendary weapon. Meanwhile, the Kronan armada showed up on Earth's radar screens. When fighter jets scrambled to meet them, they projected an image of a huge dragon and frightened away the pilots. When the ground forces fired missiles, they exploded harmlessly against the ships' force fields. Thor sped to the defense of the Earth. When Thor attacked the Kronans, they dropped a cage over him, but he tore the bars open. They aimed their disintegration beams at him, but his hammer smashed their guns. They unleashed their Mechano Monster, but he smashed it to bits. The Kronans returned to their ships and gave up their invasion.[7]

As their fleet fled back to their homeworld, the ship that held Korg, Margus, and several other Kroanan soldiers, drifted off-course and was pulled into a mysterious wormhole, crash landing on the harsh desert world of Sakaar. Korg and Margus were enslaved by the Sakaar Empire. They were separated while being trained for gladiatorial combat. Korg was placed on the same team as the Hulk, who has also ended up enslaved on Sakaar after being exiled from Earth. In his first battle at the arena Korg had to kill Margus. Along with Hulk and rest of his team, Korg was freed by the Silver Surfer and continued to aid the Hulk and the rest of his Warbound in freeing Sakaar from its Emperor until the planets destruction.[8]

Korg has become one of the Hulk's most reliable allies. He was one of the few who survived Sakaar's destruction. He accompanied the Hulk to Earth to get revenge upon the Illuminati, a secret cabal of heroes responsible for the Hulk's exile. While the Hulk threatened to destroy New York City, Korg attempted to broach communication with Earth's civilian populace. When he discovered that his Warbound ally, Arch-E-5912 had been murdered, Korg warned the New York City police department that he would aggressively investigate the matter until the killer could be identified.[2]

After Korg, Kate Waynesboro and the Warbound were teleported in New Mexico by the Leader, Korg and his allies stopped the villain's plans, but only at the cost of Hiroim's life.[9]

Korg was with the Warbound when they receive word that Bruce Banner is dead. At Bruce's funeral, Korg stated that Hulk wanted to be alone and had made friends along the way enough to make them part of his family.[10]


Superhuman Strength: Korg is superhumanly strong, though the full limits of his strength aren't known. However, Korg is at least as strong as the average member of his race, which means that he can lift at least 100 tons.


Superhuman Stamina: Korg's highly advanced musculature produces considerably less fatigue toxins during physical activity than the musculature of humans. While the full extent of his physical stamina isn't known, he can exert himself physically at peak capacity for at least 24 hours before the build up of fatigue toxins in his blood begins to impair him.

Korg is a formidable hand to hand combatant, primarily due to his experience as a gladiatorial competitor.

Like this? Let us know!
Retrieved from "https://marvel.fandom.com/wiki/Korg_(Earth-616)?oldid=5740605"
Community content is available under CC-BY-SA unless otherwise noted.