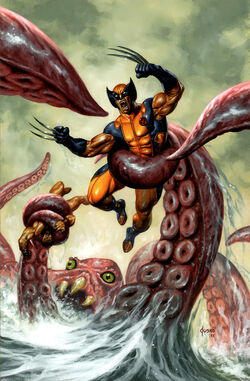 Those creatures now most often lies dormant in the seas, but can be called into battle by the sounds of a special horn called the "Proteus Horn".[citation needed]

During the Hyborian Age, a black kraken dwelled three days out from the Barachan Isles on the ocean floor. On his trip to the lands beyond the Western Ocean, Conan sailed into the area that was the kraken’s hunting grounds. The kraken extended its tentacles up to the surface, reaching aboard the ship, and snatched away two of its crewmen. Conan was soon grabbed too, but slashed the monster's eyes before swimming to the surface.[1]

In modern days, the Horn was found by Attuma who stored it in his cave for later use,[3] but never did use it. The horn was later found by Andromeda, who blew the Horn and used one of the Kraken to attack Atlantis. The attack was diverted by the Atlanteans, who used their strength to destroy the entrance to Atlantis. The rocks that fell trapped the Kraken creature deep within.[3]

The Kraken was an ancient sea creature kept in an Atlatean Colosseum. Loki, disguised as the recently defected Mandarin, called on the beast to destroy the Ultimate Alliance. The beast called on brainwashed Atlantean servants but its wild attacks destroyed the support beams to the structure they were in, and roof collapsed in on it, killing the Kraken.[4]

The Kraken was a monster sealed within the Underworld realm of Tartarus until it was freed by Ares with the Mace of War to set the Kraken and any other beasts that were to come out to rampage on Earth. That is until the New Avengers were able to push the Kraken back along with Ares and used the Mace to close the gates.[5]

Namor and Emma Frost, both dressed in armor, battled a giant sea Kraken.[6]

Due to the fragment of the Siege Perilous being spread across multiple realities, the Kraken was misplaced into the reality of Earth-12041 where it attacked Aunt May's House and also Spider-Man inside it. It was then pushed back by Iron Fist who sliced one of it's tentacles off, the Kraken was soon reverted back to its own reality.

The Kraken attacked the pirate crew of Web-Beard, but they were able to fend it off with the help of Spider-Man and Kid Arachnid, who were visiting this reality at the time.[7]

Retrieved from "https://marvel.fandom.com/wiki/Kraken_(Race)?oldid=6393832"
Community content is available under CC-BY-SA unless otherwise noted.