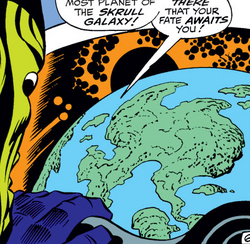 Kral IV was a resort planet within the Skrull Empire that emulated 1930's America. The planet's anachronistic culture originated with the abduction of Prohibition-era mobster John "Machine-Gun" Martin to Kral IV, where his mannerism, speech, and style deeply fascinated the Skrulls to adopt the esthetics of 1930's American culture, co-opted from footage they took of Earth.[1]

When the plant-based Cotati set out to wage war against the Kree and the Skrulls, they used the Kral System as a testing ground for their Death Blossom, an amplifier of their power to control plants which allowed them to infect many of Kral's planets.[2] In an attempt to stop the spread of the Cotati, Skrull emperor Kl'rt the Super-Skrull ordered the deployment of the Pyre, an astronuclear weapon that detonated the star Kral.[3]

Nova was on Kral IV when the Pyre was being deployed, attending an alert from Krallians who were being looted by regular Skrulls before the destruction of the planet.[4] When the Pyre triggered Kral's destruction, every planet in its system was destroyed. Nova only survived because he had the Nova Force to protect him. He would later estimate that around ten thousand Krallians had managed to evacuate before the destruction, including Prince Dezan and Boss Barker's boys from Kral IV.[4]

Like this? Let us know!
Retrieved from "https://marvel.fandom.com/wiki/Kral_IV?oldid=6080402"
Community content is available under CC-BY-SA unless otherwise noted.