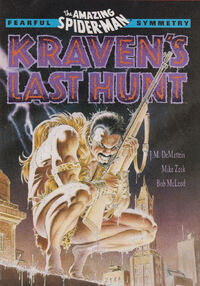 Kraven embraces his more bestial side and tries to kill Spider-Man, so that he can take his place and prove that he's better.[1] He doesn't actually kill him,[2] but buries him alive.[1]

At the same time, Vermin leaves the sewers and starts eating people in the city.[3][4] Kraven, dressed as Spider-Man, fights with him to prove that he can beat him without the help of Captain America, who helped the real Spider-Man beat him the first time he faced him. He does win the fight and locks Vermin in a cage.[4]

After two weeks stuck in a coffin, Spider-Man woke up and found Kraven.[2] Kraven unleashed Vermin, who attacked Spider-Man, but soon ran back into the sewers.[5] Spider-Man hunted him and managed to beat him.[6] Then, Kraven confesses to everything and kills himself.[5]