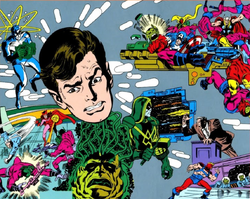 About a million years ago,[3] when the Skrulls expanded out of their home galaxy, the Andromeda Galaxy, establishing an intergalactic empire. In the Large Magellanic Cloud, they discovered the Kree homeworld of Hala. At that point in their history, the Kree shared the planet with a plant race, the Cotati, and were at the dawn of their culture. The Skrulls decided to see which race was worthy and to determine which race it was they devised a test. On Earth's satellite Moon, they created the Blue Area of the Moon, and transported groups of Cotati and Kree there. Who were left to accomplish whatever they could. Upon returning the Skrulls judged the works of the Cotati to be superior. Enraged, the Kree launched a vicious attack on the Cotati and Skrull judges, slaughtering them all. The Kree then stole the Skrulls' starship and reverse engineered their technology.[4]

Due to the immense distances between the galaxies, it took the Skrulls decades to learn of the Kree's treachery and atrocities. By which time the Kree had established their own interstellar regime, becoming bold enough to attack the Skrulls in the Andromeda galaxy. In the millennia that followed the Skrulls underwent a transition, becoming a vicious warlike race, one capable of conducting an intergalactic war against the Kree.[4] Due to the vast distances between the Skrull and Kree galaxies, the eons old war continued without a permanent conclusion.[5] As they fought each other on a million planets, with never a clear victor or loser, and in the process, both empires got stronger and prospered.[6] The two empires were too evenly matched and therefore were unable to achieve a decisive victory over their hated enemy.[5] This was a conflict with periods of open warfare and periods that were similar to a Cold War.[7]

In their attempt to free Rick Jones and Captain Marvel,the Avengers accidentally released Annihilus from the Negative Zone. In the Kree Empire, the Supreme Intelligence was subdued by Ronan the Accuser who seized control of the Kree Empire and gave the order to have Earth attacked.[8] Ronan sent a Kree Sentry to capture Mar-Vell, who was recovering from his clash with Annihilus. The Avengers pursued the Sentry to a Kree base in the Arctic, discovering his plan to devolve mankind into apes, the Yellowjacket being his first victim.[9]

Through mind-control, Ronan had Goliath attack the Avengers. Ronan was forced to abandon his plan for mankind and leave Earth upon receiving a message stating that the Skrulls have invaded the Kree Empire. The Yellowjacket reverted back to his human form, Goliath was able to regain control, and Captain Marvel was freed.[7]

The Avengers then faced persecution from the government due to the Alien Activities Commission headed by the politician H. Warren Craddock, who incited hatred against the Avengers, resulting in the Avengers Mansion being trashed by protesters. The team disbanded in the aftermath.[10]

The “Big Three” (Captain America, Thor, and Iron Man) returned to the Avengers Mansion to discover that the team had been disbanded by Skrulls who were disguised as Captain America, Thor, and Iron Man. They got the team back together and located the secret Skrull base, where they fought a team of Fantastic Four imposters. The Super-Skrull escaped the base with the Scarlet Witch, Captain Marvel, and Quicksilver as his prisoners.[11]

The Skrull ship was pursued by the Vision, while Mandroids sent by H. Warren Craddock arrested the rest of the Avengers. The Super-Skrull attempted to destroy the Inhumans before he left Earth, but Attilan’s defenses were strong enough to deflect his attack. He then returned to the Skrull throneworld, where Dorrek VII, the Skrull emperor, forced Mar-Vell into building an Omni-Wave Projector.[12] After defeating the Mandroids, the Avengers received a call for help from Triton and went to San Francisco. With Black Bolt they broke through Attilan’s defenses, and overthrew Maximus after driving him into insanity, restoring Black Bolt to the throne. While this was going on, the Kree captured Rick Jones.[13]

The Avengers head out into space and upon arriving in Skrull space, Captain Marvel uses the Omni-Wave Projector to break free of his captors. Vision nearly beat the Skrull admiral Kalxor to death in his attempt to save the Scarlet Witch and the Earth as the Skrull emperor had ordered the admiral to launch a missile that would turn the Earth into a ball of hellfire. Meanwhile Rick Jones is locked up on the Kree homeworld, alongside the Supreme Intelligence who opens a portal that sends Rick Jones into the Negative Zone, where he was forced to confront Annihilus.[14] Captain America sent Goliath to intercept the ship carrying the planet destroying missile. He was successful though the ship would end up crashing in Yugoslavia.[14][15]

Rick Jones deflected Annihilus by firing a mental force-bolt. Upon returning back to his home reality through the portal, the Supreme Intelligence educated him about mankind’s potential once it was fully unlocked. Using his new powers Rick created a small army of Golden Age super-heroes who fought Ronan and the Kree. He then froze the Skrull and Kree armies in stasis, thereby putting an end to the war, though apparently at the cost of Captain Marvel’s life. Rick and the Avengers then returned back to Earth.[16]

To prevent any future alien threats to planet Earth, Iron Man assembled a secret group of Earth’s greatest super-heroes, which took the name of the Illuminati. He led them to the Skrull throneworld, to warn the Skrulls to stay away from Earth and if necessary force them to do so. Instead, the team was captured, tortured, and experimented on by the Skrulls. They barely escaped from the throneworld with their lives. Not realizing that the Skrulls had been able to learn everything about their powers, technology, scientific knowledge, magical knowledge, and the human genome with which the Skrulls would perfect the Super-Skrull program for a future invasion.[17]

End of the War

Later during the Dark Phoenix crisis, the Shi'ar Majestrix Lilandra consulted both the Skrull Empress R'Klll and the Kree Supreme Intelligence regarding Jean Grey, the host of the Phoenix Force, whom agreed to a trial of combat between the X-Men and the Shi'ar Imperial Guard to determine Jean's fate. The Kree warrior Bel-Dann and the Skrull warrior Raksor were assigned to observe the duel by their governments and to make sure that the X-Men lost. Soon the two warriors turned on each other.[18]

For months the two warriors hunted each other in Attilan's bowels and did battle. Uatu the Watcher observed this and informed the sovereigns of the Kree and Skrull Empires. After much discussion and thought, the two empires decided that they would have the two warriors determine the outcome of the war between the two rival empires. They informed Raksor and Bel-Dann, who were honored to represent their empires in this final battle. The fighting between the two continued for months, undermining the foundations of the Inhumans' city. After Uatu informed the Inhumans and the Fantastic Four of what was happening, they manipulated the two warriors to join forces in combat against the Fantastic Four and Inhumans. They arranged it so that the heroes were "defeated" by the two, after which Uatu the Watcher interceded, declaring Earth the loser, and the Skrull and Kree Empires both winners thereby ending the eons long war.[5]

After the Skrulls lost their ability to shapeshift following the detonation of the Hyperwave Bomb,[19] the Supreme Intelligence used this opportunity to spark a second war between the Kree and the Skrulls.[20] It used the Soul Gem to balance its pink and blue Kree components and also absorbed the Silver Surfer's soul, but the Herald managed to escape and remove the Soul Gem from the Supreme Intelligence which caused the Intelligence to lose its sanity.[21] This left Nenora to lead the Kree Empire. The war ended when Nenora was exposed as a Skrull spy.[22] The alien Clumsy Foulup became the new leader of the Kree Empire thanks to the influence by the Cotati and the pink-skinned Kree.[23]

Another significant conflict arose when Thanos killed half of the universe which led to the Kree and the Skrulls blaming each other and temporarily renewed fighting, being unaware of Thanos' machinations.[24]

Knights of the Infinite

An outcast group of Kree/Skrull hybrids known as the Knights of the Infinite were formed during the war. They believed in a prophecy that once the two warring empires fell, they would be destined to unite the empires and become their protector.[25] They kidnapped the hero Hulkling, son of Kree hero Captain Marvel and Skrull princess Anelle,[26] thinking him to be the reincarnation of Dorrek Supreme, the first of the Knights. Hulkling wielded the sword of Excelsior proving him to truly be the chosen one.[27] However, following Moridun's attack, the Knights let Hulkling go for the time being.[25]

As the people of the two races had grown tired of the war the leaders of each empire, Super-Skrull of the Skrull Empire and Tanalth of the Kree Imperium finally united the two empires and thanks to Bel-Dann and Raksor convinced Hulkling to become the new ruler of the new Alliance.[28]